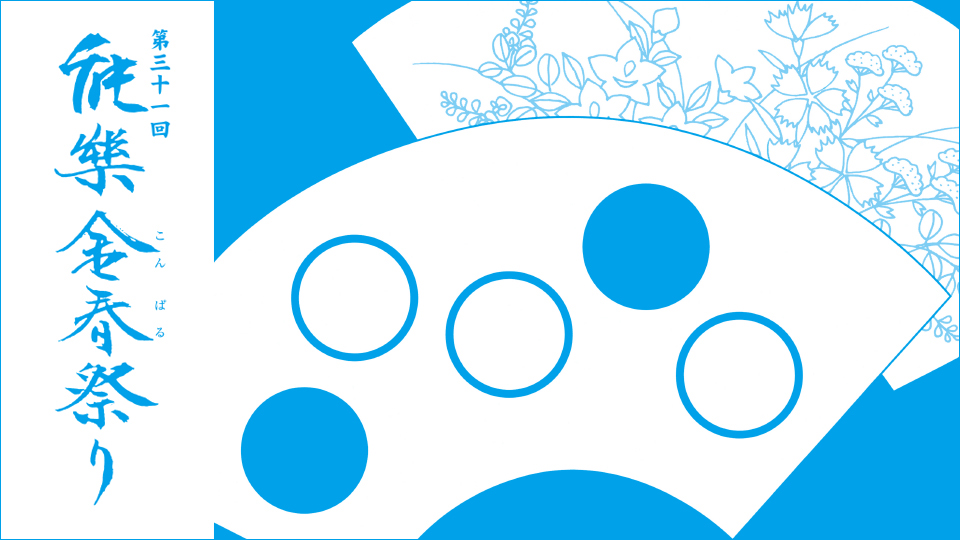 The first street to the west off Ginza-dori from Ginza 8-Chome is called Komparu-dori. In the Edo period, this street was home to the estate of the Komparu school of Noh theater. The name was retained after the Meiji period in the Komparu Festival and the Komparu geisha, and exists today in the name of a public bathhouse, Komparu-yu.
The Noh Komparu Festival began in 1985 under collaboration between the Ginza Komparu Street Association and Komparu Enmai-kai, a public interest incorporated association, with the hope of passing down Edo culture. This year is the 31st year of the festival.
The programs that will be performed on Komparu-dori on August 7 are all special Nara Komparu Noh plays showing ancient rites from a thousand years ago. The music will be celebratory songs praying for peace and enjoying the blessings of tranquility.

The Noh street dedication performances given on Ginza’s Komparu-dori on August 7 are all special Nara Komparu Noh plays showing ancient rites from a thousand years ago. The music will be celebratory songs praying for peace and enjoying the blessings of tranquility. Many people come out for the event each year to catch a glimpse of the street Noh performances. This year, thanks to the cooperation of the Komparu Enmai-kai (public interest incorporated association) and many other partners, the Noh street dedication performances will be broadcast live on Ustream and YouTube for the first time in history. 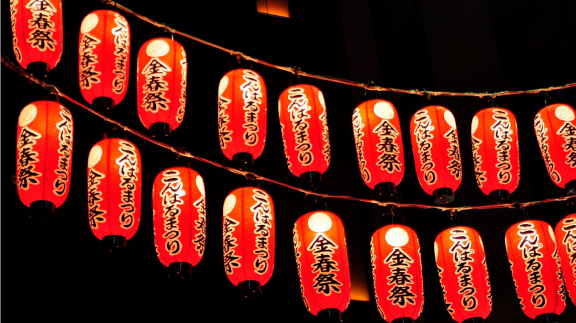 About Ginza Komparu-dori and the Noh Komparu Festival
The west side of Chuo-dori from Ginza 8-Chome is called Komparu-dori.
This street was home to the Noh Komparu school property in the Edo period and enshrined the Komparu Inari religious artifact.
The name was retained after the Meiji period in the Komparu Festival and the Komparu geisha, and exists today in the name of a public bathhouse, Komparu-yu. The Noh Komparu Festival began in 1985 under mutual collaboration between the Ginza Komparu Street Association (Merchant’s Association) and Komparu Enmai-kai, a public interest incorporated association (Noh Shite-kata of the Komparu school), with the hope of passing down Edo culture. The programs that will be performed on Komparu-dori on August 7 are all special Nara Komparu Noh plays showing ancient rites from a thousand years ago. The music will be celebratory songs praying for peace and enjoying the blessings of tranquility.
Ginza Komparu Street Association, Komparu Enmai-kai (public corporation)

When: 11 AM to noon, Saturday, August 1 and Sunday, August 2 (reception opens at 10:30 AM)
*For elementary and junior high school students
*Hands-on lesson about chanting and shimai dance.
*Please bring white tabi or socks to wear.

See performances dedicated to homeland security and universal peace on the street of Komparu-dori that lights up at night with neon lights and paper lanterns.
When: Starts at 6 PM, Friday, August 7 *No admission fee
Location: Temporary shrine at Ginza Komparu-dori in front of the Three Eight Building
*Reserved-seat tickets will be available from 4 PM on that day on Komparu-dori (one per person).
(Limited seats.)
Please take your seats by 5:45 PM.
Please note that you may not be seated later than that even if you have a seat ticket.
Those without a seat ticket may watch from the standing area in the back.
Two TV screens will be installed behind the stands. 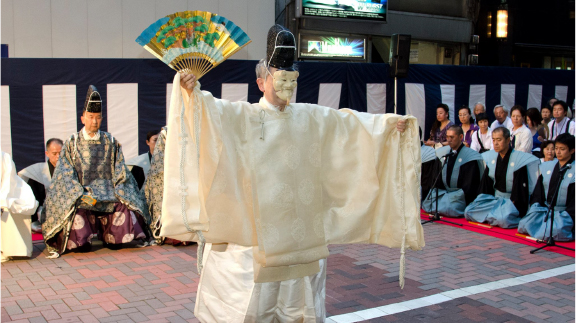 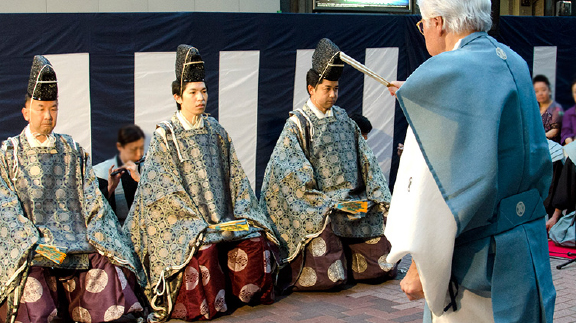 A sequence of rare dances including Enmeikaja, Chichinojo, Suzu no Dan, and also Yumiya no Tachiai. Long ago, these dances were performed annually in dedication to Takigi-Noh (Noh theater performed at night by a fire) at Kofuku-ji Temple and the On-Matsuri festival at Kasuga Grand Shrine.
They are all very old, from before the time of Zeami (renowned Noh writer who lived from c. 1363 to c. 1443). The poetry and prose are also in the ancient style, having been passed down from before Zeami’s time. Taste the essence of Nara from 650 years ago on Komparu-dori.

Site of the Komparu residence

Location: Around 8-6-8 Ginza, Chuo-ku
In the Edo period, four families, Komparu, Kanze, Hosho, and Kongo, were employed by the Shogunate as Noh actors and received land and an annual rice allowance. Noh theater originally prospered during the Muromachi period under the protection of the Ashikaga Shogunate and flourished greatly under the protection of Toyotomi Hideyoshi, an avid fan, during the Azuchi-Momoyama period. The Komparu school was particularly well-protected by Hideyoshi, who made it head of the list of Noh schools. The Edo Shogunate followed Hideyoshi’s policy and continued protecting Noh theater, and the Komparu, Kanze, Hosho, and Kongo schools were designated as ceremonial music that was deeply connected to Shogunate ceremonies.
Around 1693, the Kokka Manyoki that recorded the state of Edo at the time showed officially bestowed residences for the head of the Komparu school on Sannoji (currently Ginza 8-Chome), Kanze school on Yumimachi (Ginza 2-Chome), Hosho school on Nakahashi Ogamachi (currently Kyobashi), and Kongo school on Takiyamacho (Ginza 6-Chome).
The Komparu school was supposedly bestowed an official residence in 1627. In fact, you can see the name Shichiro Komparu on the Bushu Toyoshima County Edo map drawn in 1632 in a location covering all of what currently corresponds to lots 6, 7, and 8 on Ginza 8-Chome. The Komparu school later moved to Kojimachi Zenkokujidani (3- and 4-Chome, Kojimachi, Chiyoda-ku), but geisha who became known as the Komparu Geisha congregated at the original site that developed into a red-light district. The Komparu name remains in this area even today as the Komparu-yu bathhouse and Komparu-dori street, for example.
March 2003, Chuo City Board of Education

There was once a brick town in Ginza of a size that was rare throughout the world. It was designed by British architect Thomas James Waters and was enormous at more than 10 km long, taking 10 years to construct from 1872 and using up a little less than 4% of the national budget. In 1988, part of the remains of the brick town were discovered within the precinct of the Komparu Street Association. The late Hiroko Matsukawa who owned the land graciously put a large part on exhibit at the Edo Tokyo Museum and part of that was kept by the Street Association. Under cooperation with Chuo City, a plaque (that you can touch) reading, “Ginza Komparu-dori Renga Iko no Hi” (meaning “monument of brick residences on Ginza Komparu-dori”) was erected as a historical landmark in September 1993 near the plaque describing the Komparu residence upon building of a new brick street.

● Is it true that the schools are divided by folding fans?
Noh theater prospered during the Muromachi period with the encouragement of the Ashikaga Shogunate and is a leading performing art in Japan that has been passed down all the way to the present. It has been designated an important intangible cultural asset of Japan and an important cultural asset by UNESCO.
Noh actors are split into the main role of the shite performer and the waki, hayashi, and kyogen performers. There are currently five schools of shite performers, the Komparu, Kanze, Kongo, Hosho, and Kita schools, with the Komparu school being the oldest. The pattern and structure of the folding fans used in the shimai performances differ for each of the five schools. The Komparu school uses a natural shaped fan with straight ribs and is decorated with five circles representing five stars. Each of the schools uses a fan with different characteristics, so you can easily distinguish the school by the fans.

● What is the Komparu school?
The Komparu school develops shite performers that perform Noh chanting and dancing. It began with Hata no Kawakatsu who was a prominent figure in the late 6th century Japan, and Yasuaki Komparu is currently the 80th head of the school. The name “Komparu” originated as the stage name Gonnokami Komparu used by the son of Gonnokami Bishao who played the Noh devil during the Muromachi period when Noh prospered. His grandson, Zenchiku Komparu, who was also Zeami’s son-in-law, inherited the secrets of Shugyoku Tokuka (“gathering gems and gaining flowers”) and Kakyo (“the Mirror of the Flower”) and wrote works such as Teika and Basho.
Noh was a favorite with military commanders and was protected by Toyotomi Hideyoshi and Tokugawa Ieyasu. It has been preserved until the present through many tumultuous periods including the Meiji Restoration.