There is a special place in my heart for “Nishiginza.” I should note that “Nishiginza” is not an address found on a map of the area (although there was formerly an area called Ginza-nishi). However, the name of the station on the Marunouchi Line was initially “Nishiginza.” As I mentioned in an earlier article that I wrote about Fujiya, I would come to Ginza on the Marunouchi Line when I was a child and Nishiginza Station was my gateway to Ginza.
Although there is no longer a subway station called “Nishiginza,” the name remains with “Nishi Ginza,” a shopping mall beneath the elevated highway. It is a part of a larger commercial establishment, which is divided into several blocks, with the block in 5-chome, behind Taimei Elementary School, called “Ginza Five,” and the block spreading across 3-chome and 1-chome, “Ginza Inz.” The only block whose name has not been changed its since its opening is Nishi Ginza in 4-chome (Ginza Five used to be called “Sukiyabashi Shopping Center” and Ginza Inz was called “Yuraku Food Center”), and in that sense, too, the shopping mall brings back old memories.

A green oasis on the Sukiyabashi intersection
Nishi Ginza opened in October 1958 (Showa 33) (the company was established in 1956), and it will celebrate its 60th anniversary this autumn. The background of the founding of Nish Ginza is illustrated in detail in Watashi no Ginza Monogatari (My Story of Ginza) (Chuokoron Jigyo Shuppan, 2010) by former president Masaichi Yanagisawa. I was also able to get in touch with the current President, Mr. Tokuji Yanagisawa, so allow me to introduce the corporate history along with my conversation with them.
It was in 1953 (Showa 28) that the project to fill in the Sotobori-gawa River running below Sukiyabashi Bridge and construct a highway. I was surprised, as had thought it was a more recent project. Therefore, Kimino-na-wa (Your Name) (a soap drama starring Keiji Sata and Keiko Kishi), which was sensationally popular 1952 and 1953, was staged in Sukiyabashi Bridge in its last days.
Reading Masaichi’s book, the following excerpt was an eye-opener.
“We had initially planned to construct a much larger building. It was supposed to be a twelve-story building with four basement floors, which would all be used as a garage [“garage” according to the original text, but perhaps warehouse]. The first and second floors above ground would be parking space, the next two floors would have a two-lane highway running through them (!), and the upper floors would have offices.”
It was called the “Sky Building Plan.” If a long building resembling the Great Wall of China had been constructed in the former Sotobori-gawa River area, the landscape of the western side of Ginza would have been significantly different from what it is today. 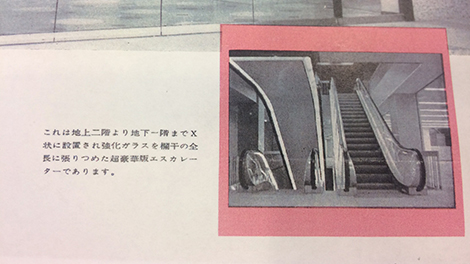 Luxury escalator
Kiyoshi Ichimura was appointed the first president of Nishi Ginza, which was to open in October 1958. Ichimura was the founder of San-ai (and also president of Ricoh). The structure of the building, with two basement floors and two floors above offering 60 stores, is close to what it is today, but according to the direct mail ad from the opening of the establishment, the store lineup included many long-established stores.
Kyukyodo, Motoki, Midoriya, Erien, Oonoya, Bunmeido, Seigetsudo, West, Tenichi, Homeishun… I also found a “Nishi Ginza News Café.”
An introduction of the café says “Unwind and watch the news drinking coffee or juice,” so I would imagine that they showed newsreels on a large screen.
The coffee shop “Bridge”, which is still in business today, had a copy that said “Paid Waiting Room” followed by a description of “various melodies to be heard through your personal earphones.” Therefore, this shop must have specialized in music. “Bridge” is famous as the shop that Kuniko Mukoda used for meetings. 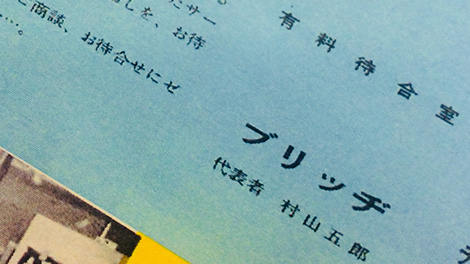 ”Paid Meeting Room” Bridge
Nishi Ginza’s copy from an early direct mail ad is another reminder of the times:

They might have had a lady make such commercial announcements out to the streets, and it is evidence that the Nishiginza area was the trendy spot of Ginza at the time. The highway (Tokyo Highway) running above the building was partially opened between Dobashi (Ginza 8-chome) and Johenbashi (Ginza 1-chome) the following year in June 1959 (Showa 34). Toward the end of 1957 (Showa 32), Nishiginza Station of the Marunouchi Line opened, and in 1958 (Showa 33), Nagai Frank released “Nishiginza ekimae (In front of Nishiginza Station)” as a sequel to his earlier song “Yurakucho de aimasho (Let’s meet in Yurakucho).” The song was arranged into a movie released by Nikkatsu. Nishiginza had become quite a popular area when Nishi Ginza opened.
When I was compiling a book of intriguing articles that had been published in the Tokyo edition of the Asahi Shimbun newspaper, I found an article in the January 13, 1961 paper titled,
“No Pedestrian Entry. Who cares? The highway is an observation deck.” The article was accompanied by a photograph of Nishi Ginza taken from Yurakucho (probably the Asahi Shimbun building) and the lines:

The highway running over the roof of Nishi Ginza: the perfect spot to view Ginza’s townscape, Shin-Sukiyabashi is clustered with people on a sunny weekend. With people standing there after parking and people walking up just to see the waves of people, sometimes the highway is busier with people crossing than it is with cars. 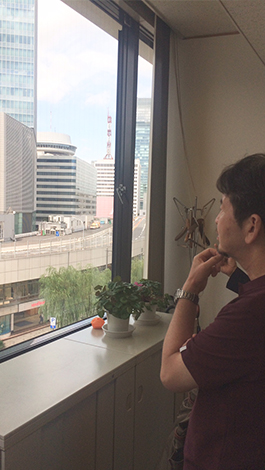 The front of Nishi Ginza viewed from the Main Office
Shin-Sukiyabashi (New Sukiyabashi) – the name is not often used anymore, but for a while after the old Sukiyabashi Bridge was replaced with the highway bridge, most people called it the new bridge. Looking closely at the picture in the article, I could perceive stairs going up the wall on the Yurakucho side, where an H.I.S. office is currently located, to the highway. “Back then, we could walk up to the highway using these stairs. There was some open space in the direction of Marion, or the then Asahi Shimbun building that was used as a parking lot,” the current president explained.
I recall seeing somewhere, celebrity portrait photographs of Nikkatsu movie stars, Yujiro Ishihara and Asahi Kobayashi, posing in front of imported cars parked in this area.
As indicated in the article, even after the highway was constructed, there must have been few cars in th streets. The highway was an “observation deck” as the title notes, and most nightscapes of Ginza then were taken from the spot.
In an album that they showed me at the office of Nishi Ginza (located inside the Tsukamoto Suyama Building across Nishi Ginza Street), I found a few pictures of celebrities playing storeowner for the day at an event celebrating the fifth anniversary of the establishment in 1963 (Showa 38). The photos showed Nana Kinomi, Kayoko Moriyama, Sanpei Hayashiya and boxer Hiroyuki Ebihara, celebrities who would often appeared on T.V. just when became a T.V. fan. It was when was in first or second grade, when I was happy being treated to a pudding or chocolate sundae next door, at Fujiya.
It might also have been around then that Nippon Broadcasting launched a satellite studio facing the small square on the Ginza side of the building. Then, a Takarakuji lottery ticket booth moved from Nihon Gekijo and is known as the Nishiginza Chance Center today. Another old store is the Sanrio store which has covered quite a large floor area from the 1980s. Including the Sanrio store, most of the stores carry items for women.
Nishi Ginza offered many ladies’ stores from the beginning, but I have heard that the “Nishi Ginza News Café” and “Bridge” were used by journalists from Asahi Shimbun to write or deliver their articles.
After the interview, I went to “Bridge” on the basement floor. I asked the waitress where Kuniko Mukoda used to sit and ordered a glass of iced coffee. Looking around, rugged-faced newspaper journalists were not to be seen, now that the newspaper was no longer in the area. Instead, there were two or three groups of young girls.
Glimpsing at their table, I could observe that they were not having tea or coffee, but a green round something… It must be the “melon pancake” on the top of the menu. It had a half-circle shape and the grid-like lines of a cantaloupe. It was indeed the “instagrammable” pancake.
It was not the kind of item that a 62-year old man would ordinarily order, but I felt somewhat relieved to see that a coffee shop that has survived sixty years since the opening of the building was adapting to the “new stylish way” of the times