Last time, indulging in an Eggs Benedict at the café on the twelfth floor of Ginza Itoya, my thoughts went to Olympic, the Western food restaurant that used to be next door. The building has been rebuilt and is now home to Tiffany’s, but Olympic is part of my earliest memories of Ginza. I remember that when I came to Ginza with my mother to shop at the department store, she would treat me to lunch or dinner at Fujiya in Sukiyabashi or Olympic. My favorite dish at Olympic was their macaroni gratin. If I remember correctly, there was a large oven in a corner of the restaurant (that my mother called by the Japanese word, “tenpi”) and the gratin would come out of it piping hot. I will never forget the taste of the golden brown toasted top layer that I would blow on from the edge of my plate so that I would not burn my hands.
I would say that my first dining experience at Olympic was when I was in kindergarten, so it must have been around 1960 or 1961… A while back, I taped a cable broadcast of the movie “Utsukushiki Teikou (Beautiful Resistance)” (1960) starring Sayuri Yoshinaga shortly after her debut and found that there was a scene that I was almost sure had been filmed at Olympic. It is where Minako Kazuki – not Yoshinaga – dines with her fiancé. The interior design with the pot-grown tropical tree and its location, with Meiji-ya seen across the street from the windows on the second floor, assured me that it was Olympic. Unfortunately, there were no other cuts from other angles, so I could not find the oven. The couple seemed to be having steak with their fork and knife. Oh, how I wish they had ordered gratin…
However, reading some essays about Ginza, I found that Olympic was famous for its steaks. For example, in his essay collection, Edokko no segare, Ryo Ikebe writes an essay titled “Bisteki” about his father taking the whole family out to have steak at Olympic when he was a little boy. He comically portrays his father ordering “bisteki” and being corrected by the waitress that it was called “bifteck.” He said that the episode was from 1928 (Showa 3) or 1929 (Showa 4), so Ikebe must have been taken to dine at Olympic shortly after its opening in 1928. Kafu Nagai also writes about dining at Olympic from around 1930 (Showa 5) in his diary Danchotei-nichijo. There is a unique description of the restaurant in his March 25, 1942 entry.
“I had dinner at Olympic at twilight. Since its opening three or four years ago, it has been so popular that it is packed every day at mealtime. The owner used to run a restaurant in Seattle, in the United States. The diners are mostly office clerks, store clerks and students – both men and women. Very few people speak in the Tokyo dialect, and almost no one knows their manners. Watching these customers dine is enough to learn the level of our country’s culture.”
The condescending attitude is very much like Kafu. He seems to have been a great fan of the restaurant from 1932 to 1933 as it appears often in his diary. However, he says little about what he ordered.
The restaurant was established by three young men who had trained in Seattle. I had no doubt that the name Olympic had come from the Olympic Games, held in Amsterdam in 1928, but they had named it after a mountain in Seattle.
“We named our new store Olympic after Mt. Olympia, which would always look up at, missing our hometowns and pledging that we would withstand all hardships.”
The May 1970 (Showa 45) edition of Ginza Hyakuten ran an article of an interview with the store. The store interior in the photo used in the article is almost exactly the same as what I saw in the aforementioned movie. The restaurant that Kafu enjoyed dining at before World War II was a two-story building. After the war, they built the eight-story building that I was familiar with – home to “a fruits parlor on the first floor, the restaurant on the second store, and a party room on the third floor,” according to the 1970 article. 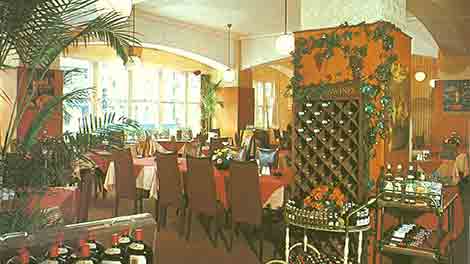 Ginza Hyakuten, May 1970 edition
I looked through back issues of Ginza Hyakuten, but failed to find any articles on Olympic from around 1960, when I was a child. However, I found an intriguing dish introduced in an article introducing the restaurant in 1978. The recommended dish was called “Oriental Rice.”
“Our original Oriental Rice is made by covering stir fried rice with special toppings and a white sauce, which is baked in the oven. It is doria with a twist.”
Oriental Rice… the name rung a bell. An article published in 1984 (Showa 59) refers to the Oriental Rice, stating, “the dishes that were created in the days of our establishment are still served today and remain very popular.” That would mean that the dish was on the menu when I was a child. It may have been this dish that I had enjoyed the toasted top layer of, huffing and puffing from the sides. Unfortunately, they did not have a photo. 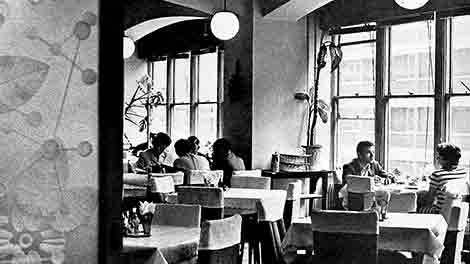 Ginza Hyakuten, September 1978 edition
In 1984 (Showa 59), I had already graduated from university. I remember having lunch there when I was working for a company in Tsukiji, but the building was eventually changed into a Sanrio gallery. The gallery opened in summer 1989, so I would guess they were still in business at the end of the Showa period.
One more memory of Olympic that I deliberately saved for last is a milk candy that they sold. Before I started reading manga magazines for boys, we had a subscription to a monthly magazine for younger children titled “Kobato.” I was addicted to a popular manga called “Korisu no Pokko-chan (Pokko-chan, the little squirrel)” starring a little girl squirrel. Olympic sold a milk candy depicting Pokko-chan. I recall seeing an ad next to the manga, so I might have asked my mother to take me to Olympic not for the meals but for the candy. If I remember correctly, the ad had a picture of a girl holding the candy in her hand, posing in front of the “Birthplace of Ginza” monument that had been placed in front of the store.
I could no longer recall the name of the candy, but when I visited the Modern Manga Library in Waseda, I found the ad that I has been searching for in the October 1963 (Showa 38) edition of Kobato Yochien (Kobato Kindergarten) (name changed from Kobato, Shueisha).
There was a photo of a girl carrying the candy in the basket of her bicycle along with the slogan, “Mom, I got Risumy.” The ad was not exactly as I remembered it, but I would suppose it was a later version. It said “Olympic Seika Co., Ltd.” With the address of the restaurant in Ginza 2-chome. So, the candy was called “Risumy.” The red box with a string looked identical to the package that Milky came in. Both companies (Olympic and Fujiya) were located in Ginza… its must have been a carefree time.
I wouldn’t insist on Risumy’s revival, but I would surely like to see the Olympic restaurant restart business somewhere. 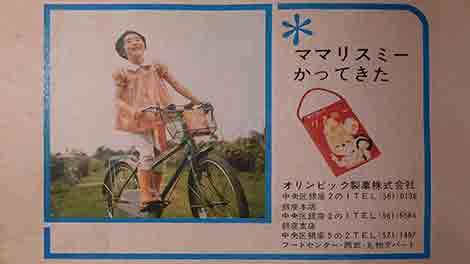 Kobato Yochien, October 1963 (Showa 38) edition (Modern Manga Library collection, Meiji University)
Ginza Hyakuten runs a mini column on items bought or found by Mr. Izumi during his interviews for his monthly column “Ginbura Hyakunen.”
Ginza Hyakuten is available at member stores.
Or, have your personal copy delivered every month by subscription.
Please refer to our website for details: http://www.hyakuten.or.jp/