It’s summer! Beer! The LION!
From the Ginza 4-chome intersection, let’s walk up Ginza Dori toward Shimbashi. Arriving in 6-chome, where the Matsuzakaya Department Store used to stand, we find the large GINZA SIX building which was recently completed, absorbing the adjacent building as well. However, beyond GINZA SIX, in its shadows, the LION Beer-Hall stands as it always has. This time of year, just before summer, the sight of that yellow signboard hanging against the vintage pink facade makes me gulp and my feet seem to be drawn over. 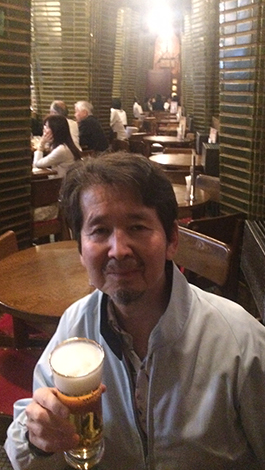 Starting with a small glass of Kuro (Black) Label to quench my thirst.
One early summer day at twilight, I came by not just to have a drink, but for an interview about their history. Walking through the stately entrance into the hall on the first floor, I found groups of people already drinking beer from their mugs at 4:00 clock. At a table in the corner of the room, I interviewed Ms. Yoshiko Aoyama from the Public Relations Department – a young pretty lady in her third year at the company! She told me, “The interior design of the Lion Beer-Hall in Ginza 7-chome has changed little since it was built in Showa 9 (1934).” 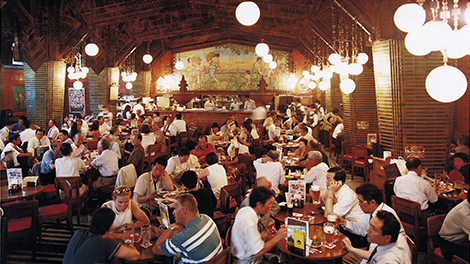 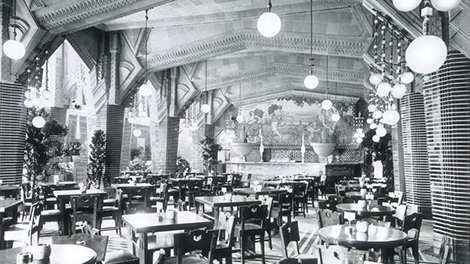 Inside the beer hall at the time of its establishment
Sitting inside, we are reminded, “Thanks to your support, we’re celebrating or 83rd anniversary.” This means they opened in 1934. Moreover, learning that their opening was on April 8, which happens to be my birthday, I felt a close connection. (The office building that was built at this site in 1908 (Meiji 40) had also housed a beer hall since 1917 (Taisho 7).
The high ceiling makes you feel like you are in a European church, and what is most striking about the room is the mosaic in the back of it, hanging as if it were on a sacred alter.
It depicts women harvesting barley and there is a building that looks like a beer brewery in the background beyond the fields. The artist, Eizo Sugawara, was an apprentice of Tatsuzo Sone, the architect who designed the original Tokyo Kaijo Building. He was convinced in person to work on the mosaic by Kyohei Makoshi, the famous president of Nippon Beer who established the foundations for the current beer hall. He had taken a liking to the interior design of one of his favorite restaurants (Mayura on the basement floor) run by the kenban (geisha registry) on Konparu Dori that had been the work of Sugawara.
Those who are familiar with the history of Tokyo might know that the original beer hall, which preceded the current one, was located on the southern side of Ginza 8-chome, where Tenkuni stands today. It was opened in the summer of 1900 (Meiji 32) for the promotion of Yebisu Beer, which had been introduced to the market almost ten years earlier in 1891 (Meiji 23). The idea was proposed by then President, Kyohei Makoshi. By the way, my knowledge of the corporate history is based on historical material and what I have learned from an old friend (a schoolmate one year senior to me), Akira Hashida, who is an Advisor for Culture and Public Relations at Sapporo Breweries Limited as well as President of the Museum of Yebisu Beer. 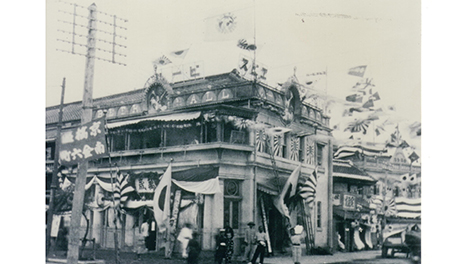 Yebisu Beer Beer-Hall
At this point, the beer brewery was yet to be built in what is now Ebisu, and the area was not even called by that name. The Yebisu brand was named after Ebisu (god of fishing and good fortune), one of the Shichifukujin (Seven Gods of Fortune), which was used as the brand character. Back then, around in the late 1880s to early 1900s, many brands of local beer were named after and depicted unique characters, including Tengu Beer, Fuku Beer (using the Otafuku (moonfaced girl with rosy cheeks) as its brand character), and Hotei Beer and Fukuroku Beer (named after two other Shichifukujin gods)
The Yebisu Beer-Hall opened on the edge of Shimbashi, in what was then Minami-kinrokucho 5-banchi. They rented a two-story brick building that had been built after the Great Ginza Fire of Meiji 5 (1673) and had Yorinaka Tsumaki, famous for decorations such as the giraffe sculpture of Nihombashi, take care of the interior design. What they couldn’t decide on until the very end was the name “Beer-Hall.” Of the many candidates, including “Beer Bar,” “Beer Room,” and “Beer Saloon,” they had almost decided on “Beer Saloon,” but since there was a disreputable store with the same name in Yokohama, they finally decided on the Japanglish word “Beer-Hall.” The name “Milk Hall,” which refers to cafes featuring milk that later became popular throughout Japan, was derived from the “Beer Hall.”
The concept of the Beer Hall that Makoshi had in mind was to serve beer, which was a luxury only available at high-end Japanese restaurants at the time, as a more casual drink. There was no food menu at first. However, newspaper articles written one month after its opening reveal that the Beer Hall was crowded with customers representing all walks of life.
“The rickshaw puller and the gentleman sit opposite one another, the mechanic and the sophisticated businessman sit side by side, and the frock coat and the military uniform engage in conversation. They all drink the same bubbly beer and leave when they finish with the same smile on their face.” (Chuo Shimbun, September 4, 1900 (Meiji 32))
It would seem as though the atmosphere of today’s Beer Hall already prevailed, but beer was still quite expensive. It cost ten sen (=0.1 yen) for half a liter of beer, which is equivalent to approximately 1500 yen for a medium size mug (500cc). That would mean than people were sipping their beer rather than drinking it in large amounts.
By the way, I mentioned earlier that it opened in the summer of Meiji 32, but to be more specific, the date was August 4. Even today, all Ginza Lion restaurants sell all beers for half price on its anniversary. Come to think of it, perhaps the opening of the restaurant in Ginza 7-chome was on April 8 because of an obsession with the numbers 4 and 8.
Many postcards of the townscape of Ginza in the Meiji period depict an overview of the area from Shimbashi to Ginza 4-chome and Kyobashi. The Beer Hall can be found on the right side and on the left side is the gourd-shaped clock tower of Hakuhinkan, when it was still the Kankoba shopping center. Come to think of it, Hakuhinkan was also established in Meiji 32 (1900), the same year as the Beer Hall. That makes me wonder if they had discussed opening in the same year, targeting customers who fancied new trends.
Interviews are indeed important, but sitting in a beer hall without a drink… To accompany my half-liter mug of draft beer, I ordered peas boiled in salted water – a very simple dish but very light and good. My guess is that they served simple dishes like this at the time of their opening. I also ordered “Beer-Hall Stew,” which I would describe to be a Japanese-style beef stew. It was quite tasty, and what had made me order this particular dish was my curiosity for the “Yebisu Stew (Yebisu-ni)” which I discovered on the menu that they first used when they opened in Ginza 7-chome in 1934 (Showa 9). 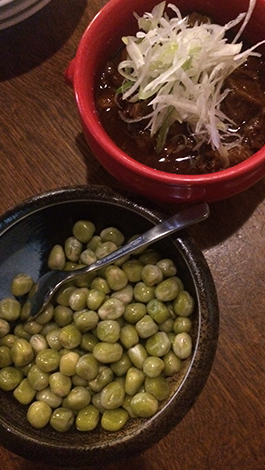 Boiled peas and Beer Hall Stew
The Yebisu Stew….. Not even Ms. Aoyama or Mr. Hashida could provide me with any details. However, an article about the first menu in Cheers to the Beer-Hall, a book on the corporate history of Sapporo Beer, refers to “Chilled Oden (Kanto-ni)” as a summertime specialty so the “Yebisu Stew “could have referred to this, with the name coming from a play on word (or the dish might have been stewed in beer….). The original menu also listed a “Vitamin Beer,” which I am also very curious to find out about.
Now, my readers may wonder whether I have not forgotten about the “Lion” in Ginza 5-chome. Some of you may feel that you need to make an objection. But of course, I would not forget about the roots of the “Lion” name.
The Café Lion. Readers may recall reading about it in a previous issue in which I introduced episodes from 1912 (Meiji 44). (Lions also sit in front of the Mitsukoshi Department Store on the other side of the street, but since it was not until 1930 (Showa 5) that Mitsukoshi opened, this “lion” is older.) That year marked the opening of three major cafes – Café Printemps, Café Paulista and Café Lion. Café Lion was run by Tsukiji Seiyoken (predecessor of Ueno Seiyoken) and the owner Uhei Kitamura of Tsukiji Seiyoken named it after J. Lyons and Co, one of his favorite spots at Piccadilly Circus. 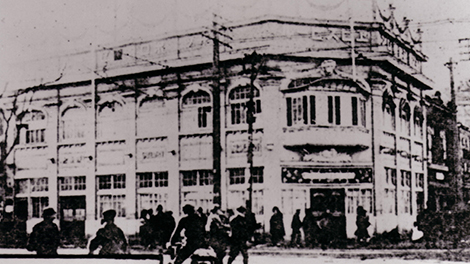 Café Lion on the outside 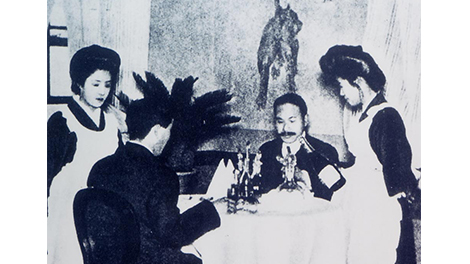 Inside Café Lion
There are many stories to tell about the Café Lion, including how the lion sculpture in the café would roar when a certain amount of beer was served and how it competed with rivaling Café Tiger over waitresses, but I will not go into that. From the beginning, the beer (Yebisu, Sapporo, Asahi brands) they served was brewed by Dai-Nippon Beer (formerly Nippon Beer) and after Seiyoken withdrew from management, Dai-Nippon Beer took over on August 30, 1931 (Showa 6), turning it into the authentic beer hall that continues to this day.
Until around 1968 (Showa 43) when I was in elementary school, the restaurant was located above ground with neon lights shaped like the Sapporo Beer Star on the roof above the second floor. When the building was renovated in 1970 (Showa 45), the restaurant moved to the basement floor.
Guided by Ms. Aoyama, we went to Brasserie Lion GINZA PLACE in Ginza 5-chome. My first drink was the famous craft beer that is only available in the basement Brasserie. This series of beer features seasonal products that change from time to time. The beer that I had was made from Furano Magical Hop produced in Hokkaido and had a strong and fruity mango aroma. With a counter near the entrance, the basement floor is designed like a bar or brasserie and reminds one of the times when it was a cafe. 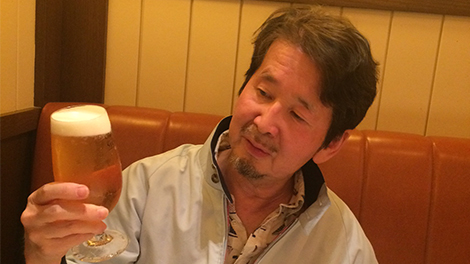 Hmmm. The mango aroma is great.
If you go down another floor to B2, you will find a more spacious restaurant. I indulged in the roast beef that I had missed in Ginza 7-chome because it was not ready.
The subway station is located right in front of the B1 entrance to the Lion Brasserie in 5-chome. It is the perfect place to stop by for a quick drink before taking the subway home. The casualness of the location indeed represents the soul of the Beer-Hall. 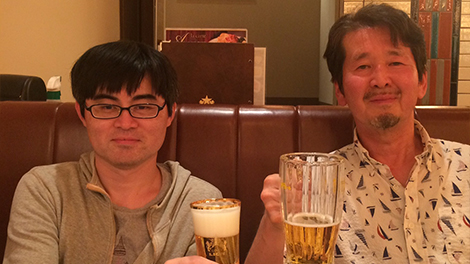