A visit Kyobunkwan with a sacred feeling

Until very recently, I had believed that Wako was the only building standing on Ginza’s main street (Ginza-dori) from before World War II. However, Kyobunkwan Seishokan (Bible Building), standing on the northern corner of the same 4-chome intersection is also a classical piece of architecture completed in 1933 (Showa 8). The long history of the building is difficult to notice, given its refurbished façade, but when one walks through the magazine corner on the first floor to the the elevator hall on the west side of the building and goes up the stairs, hints of the early Showa period can be found in the railing and window frames. (An antique box for storing the fire extinguishing hose was also installed on the wall of the stairs leading to the basement floor, as was brought to my attention when I visited the building for an interview.) 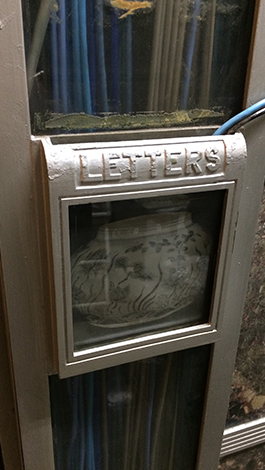 Classical mail chute
I had always hoped to write about the history of the Kyobunkwan bookstore one day, and I was granted the opportunity to interview the current president, Mr. Mitsuru Watabe, in person. 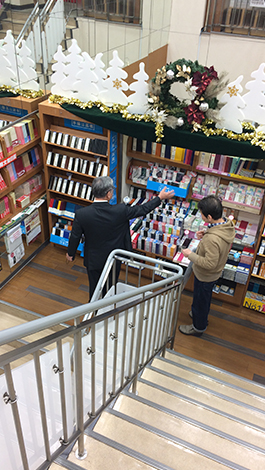 The staircase is used as the entrance
I was taken to a spacious meeting room in the back of the editing room on the seventh floor. Based on my knowledge that Kyobunkwan was a Christian bookstore, I curiously looked around the room in search of a sacred alter with a cross, but could only find paintings on the wall. Then, just when we were about to start the interview, a bell rang. For a moment, I imagined chapel bells ringing somewhere in the Kyobunkwan building, but President Watabe laughed, saying,
“Ah no. This is the three o’clock chime ringing in the Wako clock tower.”
The history of Kyobunkwan dates back to when the Methodist church began missionary activities after the lifting of the ban on Christianity in 1973 (Meiji 6).
“In 1885 (Meiji 18), at a church that used to stand on 11 Tsukiji Kyoryuchi, a decision was made that they would fully launch activities to publish and sell bibles and tracts. The decision was made on September 9, which could be referred to as Kyobunkwan’s birthday.” The church in Tsukiji is the origin of the Ginza Church, which is located on the corner of Sotobori-dori, walking westward on the street running on the side of Kyobunkwan building.
By the way, a tract is a brief brochure that summarizes and communicates the church’s doctrine. Back then, Methodists were called “Me” in Japan, taking the first two letters of their name and written out as “美以(美)” in kanji characters. In the Kanto region, they had originally run a store in Yokohama, but the office and store was eventually moved to Ginza. They were first located in 7-chome, then Takekawa-cho, and in 1893 (Meiji 26) moved to 3-chome where the Saegusa Building (Apple Store) stands today. Two years later, they relocated to 4-chome. It was in 1906 (Meiji 39) that they moved from near Wako to the northern corner, where they stand today.
“The Kyobunkwan Building, a four-story brick building, stood out as an attractive building even amid the glitz and glamour of Ginza in those days. […] We had around twenty employees who attended customers in the store in kimonos, wearing a ‘kakuobi’ belt and apron. They were devoted to selling foreign books and missionary literature…”
The description can be found in the corporate history booklet (Kyobunkwan monogatari: Meiji, Taisho, Showa, Heisei no 130-nen (The story of Kyobunkwan: 130 years through the Meiji, Taisho, Showa and Heisei period) compiled by President Watabe himself. The booklet introduces a unique sales operation launched in the Taisho period which involved becoming Victor Record’s local representative. Furthermore, Kyobunkwan was initially asked to become the sales agent for Omi Kyodaisha (Omi Brotherhood)’s “Mentholatum,” though in vain. Now that I think about it, I recall seeing a large Victor Records ad on the roof of the building until very recently, and a Mentholatum signboard can be seen in a photograph of the building taken from outside in around 1955. Therefore, I would suppose that their relationship had continued over quite a long period of time.
Another episode from the Taisho period is welcoming Hanako Muraoka, an author of children’s books who was also spotlighted in NHK’s morning drama series, as an employee. Having studied at Toyo Eiwa Jogakuin, she published her first book, Rohen from Kyobunkwan’s predecessor, the Christian Literature Society of Japan, and two years later, she started working in the editorial section for Shokoshi, a magazine for children that the Society published. Around then, she met Keizo Muraoka, who worked at Fukuin Printing Co., located behind Kyobunkwan, and later married him. (Keizo’s father owned Fukuin Printing Co.)
Four years after Hanako found a happy end to her “love in Ginza,” the Great Kanto Earthquake burned down the beautiful four-story Kyobunkwan Building. By the end of the year, store was back in business in a two-story barrack and held a Christmas sale.
Fuji Ice, which Ginza’s history cannot be told without mentioning, was also on the second floor of the post-earthquake barrack. It is a place that many writers have written about in their novels and essays.
Fuji Ice continued to run their restaurant on the first and basement floors of the current building that was built in 1933 (Showa 8). Shinsai fukko 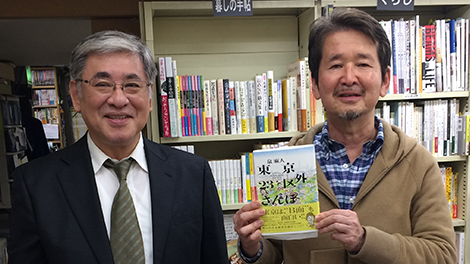 Hurry for an autographed issue!
During this time of year, Ein Karem, on the fourth floor, has Christmas cards lined up from the entrance of the shop. It was nice walking into the store from the classical elevator hall, as it reminded me of a traditional Christmas in Ginza from a while before. Looking for Christmas cards here would be a wonderful way to spend a cold snowy day. 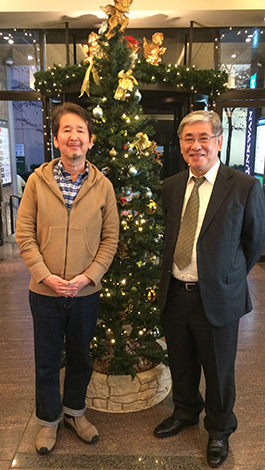 With President Watabe in front of the Christmas tree