The mysteries of a legendary panoramic building, TENKADO

It is said that the word “Ginbura” was born in the early years of the Taisho period, but Kafu Nagai had strolled through the streets of Ginza even before the word came into being. An author, Kafu took walks in Ginza as a favorite pastime and wrote about them in his famous essays. One notable essay is “Ginza Kaiwai (Ginza and its surroundings)” (July 1911 (Meiji 44)) that was published among a series of essays in Mita Bungaku. The essay contains a lively description of Ginza when the “trendy spots,” including cafes and beer halls, opened one after the other. What particularly interested me, reading the essay, was a building called Tenkado that stood on Ginza Dori in Ginza 8-chome. Kafu had apparently used the building as an observation deck during his walks in Ginza. Allow me to introduce a paragraph from it:
“From time to time, I enjoy the view of the city from the third floor of the Tenkado building. Since I am not a dressmaker at Yamazaki Yofukuten or a sales staff at Tenkado, the easiest way to enjoy a panoramic view of the city is to go up the stairs of Tenkado. When you get as high up as that, Tokyo is not as dirty as it looks down on the ground. Under the clear blue October sky, the sea of tile roofs continue endlessly and the conspicuous columns sticking out of it is quite an appalling sight, but in any case, one gets the idea that Tokyo is indeed a large city.”
Kafu goes on to explain what he can see in the far distance – Kasumigaseki, Hibiya, Shiba-koen, and Shinagawa. Then, he provides a detailed description of the foreground.
“Taking my eye away from the far view and looking down, I could see several backstreets running straight through the roofs lined up at the same height, parallel to the main street. The laundry drying platform extending from every house looked as though small boxes of sweets had been neatly arranged on them, and on an afternoon with thin clouds and soft sunlight, the colorful red cloth hung on the lines and pots of green plants on the floor shined surprisingly brilliantly among the begrimed walls and roofs. When the shoji (paper windows) that lead into the house from the platform was open, I would take the liberty of peeking into the room on the second floor to see what people were doing. I would sometimes watch a woman with her shoulders showing putting on makeup or taking a quick shower by pouring a few buckets of water on the narrow gutter lid near the backdoor.”
It is amusing to imaging Kafu indulging in viewing the cityscape, in some ways as “peeper.”
So, what kind of building was Tenkado? My research led me to a late Meiji postcard of a panoramic view of Ginza seen from Shimbashi. Seven or eight buildings beyond Hakuhinkan, with its striking gourd-shaped clock tower, there was a building with a white façade in from of the red-brick Shiseido building. It was an intriguing building with the letters TENKADO and DEPARTMENT STORE written on the wall and an object shaped like the sun and a tower-like structure on the rooftop, and got the impression that it had undergone a few renovations. It must have been one the first buildings that called themselves a department store. 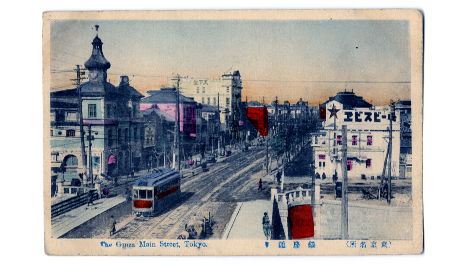 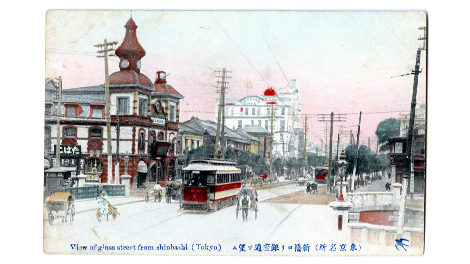 Tenkado, viewed from Shimbashi-2
I learned that it was an exhibition hall, but little was to be found about its history, compared to Hakuhinkan. Then I asked to join a meeting (Ginza Cultural History Study Group) held at Ginza Saegusa’s Cultural Program Office, which I interviewed in the previous volume, and learned a few new facts. First of all, Tenkado appears in Meiji no Ginza Shokunin-banashi (Stories of Artisans in Ginza during the Meiji Period), a book written by a study group member, Koichi Noguchi, in the narrative told by an old craftsman of a moonseed basket store (Akitaya) that continues business in Ginza since the Edo period.
“It was a three-story building. It was a mixture of an exhibition hall and a department store and sold luxurious household goods, accessories for Western clothing, and underwear on each floor. The storefront was about 6 ken (around 10.8 meters). It felt like the entire store was an entrance hall and merchandise was displayed on both sides of the aisle. When it was first opened, customers rushed to the store out of curiosity and it seemed like it was doing well, but the owner seems to have changed several times within a few years.
It was established in November 1909 (Meiji 42) (after the Ogawamachi store opened in October), and was sold to Kyodo Fire Insurance Company for 100,000 yen in less than ten years later in November 1918 (Taisho 7). It must because it was in business for only a short period of time that there is little material on it.
In addition to the panoramic view from the direction in which Hakuhinkan stood, I discovered another valuable postcard that showed the façade of the Tenkado building in the Reference Room. The façade also had decorative windows depicting the sun and some engravings on the outer walls. It was tall for a three-story building, and compared to the building next to it, it could well have been a five-story building. 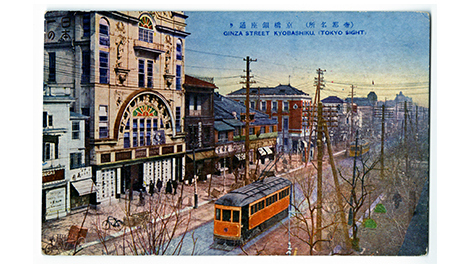 Front entrance of Tenkado
I found myself stunned when I saw the cover page of the fifth volume of Ginza Bunka Kenkyu (Ginza Culture Research), the study groups’ journal. The cover page, or the first page, to be precise, had a description of the material on the cover page written by Mr. Susumu Saegusa –
“The long shot photo on the cover page is a postcard from the The Great Sights of Tokyo series. It shows Takekawacho on Ginza Dori (currently, Ginza 7-chome) at the end of the Meiji period, taken from the roof of the tall (five-story) Tenkado building that had been newly built and opened in Izumicho, the adjacent area.”
Since it says “five-story” here, the building may have been rebuilt at some point, but looking at the cover page picture, I unconsciously put myself into Kafu’s shoes. Since it looks out to the main street, there are no laundry platforms or showering to be seen, but indeed it is a good view that makes one want to climb up to the rooftop. By the way, on the right side of the street, there is a white building that seems to read “Yamaha Organ Piano,” and this must be the predecessor to the current Yamaha building.
The description includes excerpts from Karamonoya to sono seso (Chinese merchandisers and their society) (Michio Ito ed.) and Tohto shin-hanjou-ki (New records of prosperity in the eastern capital) (by Koken Yamaguchi), the latter of which I found quite amusing:
“Tenshodo’s illumination, Tenkado’s towering large hat on its high-rise roof and Hattori’s large clock are the important ornaments of Ginza. […] Tenkado’s way of doing business, extensively advertising in the newspapers that it was the largest discount store under the sun and showing motion pictures inside the store, was indeed eccentric.”
Tohto shin-hanjouki was published in 1918 (Taisho 7), the year Tenkado went out of business. I was curious about the “newspaper ad” that was mentioned in the excerpt, and as always, went to the National Library to look for then in the reduced-size editions of old newspapers. I found several ads in the paper dated from October to December, 1909.
First, an ad of the Kanda-Ogawacho store which had a motion picture theater called Tenkaza adjacent to the store.
Under the ad copy, “Come to Tenkado and Tenkaza to keep up with the latest trends,” it said, “Tenkado sells truly inexpensive products and customers who buy more than three yen’s worth will be granted the opportunity to see a rare motion picture at Tenkaza as a token of our appreciation,” so movies were used as a promotional tool. By the way, the building standing in the Ogawamachi intersection still bears the name Tenkado Building, although it is a successor with no traces of those days.
Then in the November 27 newspaper, I found an advertisement of “Tenkado opening in near Shimbashi.” Since in those days, the tram stopped at “Shimbashi” station, close to Shimbashi Bridge, in front of Hakuhinkan, I have no doubt that this ad referred to the Ginza (Izumocho) store. November 27 was a Saturday, so the store must have opened on a weekend before the end-of-year shopping season.
“Tenkado features high-quality Western goods sold at a surprisingly cheap price.” Under a casual copy, the ad listed some of the merchandise it carried:
Latest fashion hats, latest style ladies’ stoles, blankets, lap blankets, knits, gloves, socks, suspenders, perfume, soap, drawstring purses…
It was a time when hats were very popular among gentlemen, and not only did Tenkado use a top hat as its logo, a hat store on the same street also often had ads printed in the newspaper saying “Trendy hats at Daitoku Shoten.”
Tenkado’s ad ends aggressively: “Unbeatable discounts. No reason not to go. No time to lose”
And they had reason to rush their customers, as Tenkado disappeared from Ginza in no time…. 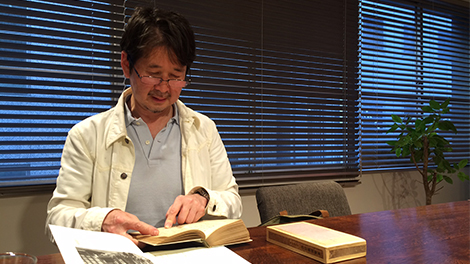