A visit to Taimei Elementary School, king of elementary schools

On the sixth floor of Tokyu Plaza Ginza, which was recently built in Sukiyabashi, Marufuku Coffee from Hozen-ji Yokocho in Osaka has opened a coffee shop. I have a special liking for coffee shops from the Kansai area, such as Inoda Coffee in the upper floors of Daimaru Department Store in Tokyo Station, and I often stop by at Marufuku Coffee, too. The window seat on the southern side of the shop has a good view of Miyuki Dori. I especially like the view of Taimei Elementary School from the table in the corner that slightly projects out. The other day, when I was gazing out the window at the school gate, a group of women, who looked beautiful even from a distance, walked through it. My guess is that they were mothers who had come for a briefing on some school matters, but considering the location, I imagined that if I saw them up close, they would look like owners of upscale clubs in Ginza. Who are the children that go to this elementary school in these modern times? Out of such curiosity, I decided to interview Taimei Elementary School. 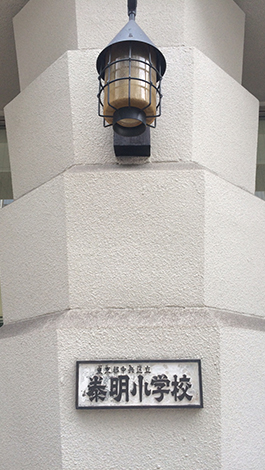 Front entrance
I entered the school premises through the French Gate with high walls with fancy arched windows on both sides. I went to the Principal’s Office to interview Mr. Toshitsugu Wada, the 31st principal of the school. Mr. Wada was born in 1955 (Showa 30), which means that we are from the same generation.
“Currently, we have 334 children in a total of twelve classes. Each grade has two classes, each with less than thirty students.”
They had more students than I had imagined, However, I wondered if the majority were not coming from outside the school district
“I believe there are more local children than before. More than thirty children live in the local school district. This is because more family-type condominiums are being built in Ginza 1-chome and 8-chome. When we look at the entire Chuo-ku area, quite a number of children come by the city bus from Harumi and Kachidoki.”
According to the principal, although there are no longer children coming from families living on the floor above their store in Ginza, some children come from families who are old Taimei fans, with four generations of children studying at Taimei Elementary School.
With a history of 31 principals, the school was founded in 1879 (Meiji 11). There is a monument near the entrance that tells us that Tokoku Kitamura and Toson Shimazaki went to school at Taimei in its early days, in around 1882 and 1883. They were two grades apart. In 1912 (Meiji 45), the modern second-generation building with a cylinder hall was completed and used until the Great Kanto Earthquake in 1923 (Taisho 12). If you take a look at a map from these times, you will find the city tram (former Sotobori Line) passing right behind Taimei Elementary School, along the Sotoboriggawa River. In 1929 (Showa 4), when Tokyo was recovering from the earthquake, the current Sotobori Dori was expanded and the city tram rails were also moved. The current ferroconcrete building was built almost in line with the series of town redemarcation-related construction projects. 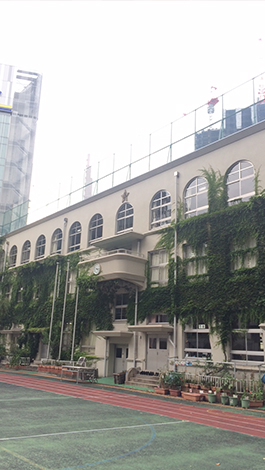 View of the school building from the schoolyard
Featuring semicircular lines, including the arched windows, the building is not the works of a prominent architect, and yet it is beautiful. The bird’s eye view of it looks like the streamlined train cars that were popular in the early Showa period. Considering that there is a bed of water on its side, it may have been designed in the image of a ship. The Asahi Shimbun building that was constructed around the same period on the other side of Sukiyabashi Bridge was also often referred to as a battleship.
Wajiro Kon’s Shinban Dai-Tokyo Annai (New Guide to Larger Tokyo), published in December 1929 (Showa 4) contains a description of the newly built school building (used from June). “Back in the times when Ginza was built with red bricks, the school, being the first brick elementary school in Japan, was to be described by no other word than “modern.” This long history has been updated with a “super-modern” dark cream-colored three-story building that reminds one of a steam ship. It took 450,000 yen in construction costs and a period of one year and three months for the building, covering a total of 1,298 tsubo (a traditional Japanese unit of areal measure, roughly 3.3 m2), to be completed. The building houses twenty classrooms, a hall with a seating capacity of 700, a roof-top athletic field, and a basement. The classrooms are spaciously lined in one row, and thus can take in much sunlight from the windows. The science lab, handicraft room, music room and art room are all equipped with cutting-edge facilities. In particular, the shower room where children have access to hot water lives up to its “super-modern” name. Each classroom is also equipped with an electric steam heating unit, A small playground has been completed adjacent to the rooftop athletic field and the roof constitutes a corner of the flower bed. The location being one of the most high-end spots in Tokyo with the Imperial Hotel nearby, the school was conscious about visits to be paid by foreigners and spent a great amount of money to use the best materials so that it would not be something to feel shameful about.”
It is often said that after the great earthquake, elementary schools were restored with a priority on disaster prevention and safety and were thus robustly built even if it meant more costs. However, reading this description, we learn that Taimei Elementary School was exceptional. (According to Mr. Wada, the description of the rooftop is rather questionable.) Kon’s insight of “visits to be paid by foreigners staying at the Imperial Hotel” is particularly impressive.
Furthermore, according to Taimei hyakunen monogatari (The centennial history of Taimei Elementary School), which was published in commemoration of its centennial anniversary, “the first-aid room was equipped with the same medical devices as those that would be found in a small hospital, and weak children were periodically given medical treatment using a sunlamp. Well, by “sunlamp” he probably meant that they were exposed to ultraviolet rays so that would be unthinkable today.
The centennial history book contains an excerpt from a book published in 1937 (Showa 12) to commemorate the school’s sixtieth anniversary that explains the characteristics of the children that went to Taimei. I found this observation to be quite interesting.
“1. Alert, with worldly wisdom and cheerful
2. Gentle, graceful and elegant
3. Physically extremely weak with little stamina
4. Lacking in strong minds, some with no spirit of independence
5. Easily controlled by calculative and speculative sentiments
Setting aside 1 and 2, the third line leads us to imagine a connection with the sunlamp in the first-aid room. In other words, many of the boys and girls were clever but weak… and perhaps that has not fundamentally changed today. The importance of physical education is stressed in the principal’s message on the school website, using the keyword “PE knowledge.”
“Perhaps owing to entrance exams for junior high school, children are academically capable, but physical education is also an important part of learning. Given the low school average in the ward-wide physical fitness test, we have launched what we call “Taimei time,” or twenty minutes for light exercises before first period.”
The twenty minutes in the morning are also sometimes used for reading or singing together.
Meals are just as important as exercise. I was curious to know what kind of lunch children were served in a school in the middle of Ginza. For example, according to the school website, their menu on July 1 was: “wakame (brown seaweed) rice, miso soup, deep-fried sandfish, spicy stir-fried minced meat and glass noodles, melon, milk.” They seem to be having more sumptuous school meals than what we used to have when I was in school, but the menu is the same in all elementary schools in Chuo-ku. However, they do enjoy one special option exclusive to Taimei Elementary School. Once a semester, their school lunch is made using broth prepared by Toru Okuda, the head chef of Ginza Kojyu, a Michelin-starred traditional Japanese kaiseki restaurant in Ginza.
Speaking of taking advantage of location, their social studies field trips include visits to local art galleries as well as to the theater for kabuki and Takarazuka Revue Company shows.
On the day of the interview, the principal gave me a tour of the school. The faculty room and nurse’s office (which is probably what used to be the first-aid room, but most likely without a sunlamp today) are on the first floor, as well as the facilities of the kindergarten that was opened after World War II. Beyond the window in the back, I could see the swimming pool. Adorable penguins stand by the smaller pool for kindergarteners. 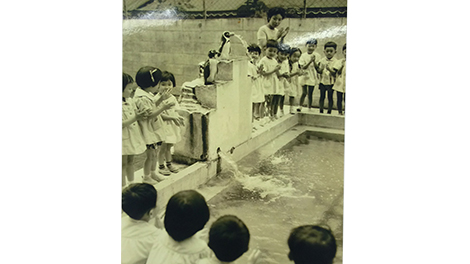 Photo of the swimming pool when it was completed 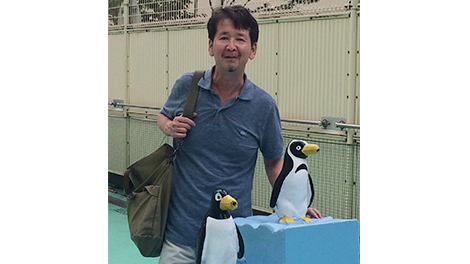 The penguins are still here!
On the second floor are the classrooms for the lower grades. What fascinated me is the reference room that exhibits the works and biography of Tokoku and Toson and all the other famous graduates, including Fumimaro Konoe, Mitsuharu Kaneko, Yoshiko Okada, Kunitaro Kawarasaki (kabuki actor and son of Shozo Matsuyama, owner of Café Printemps), Shinzo Fukuhara of Shiseido, Yataro Ikeda (professor at Keio University and whose family ran Tenkin), followed by Takeshi Kato, Yukiji Asaoka, Chinatsu Nakayama, Mari-Chiyo, a popular geiko from Shimbashi…. What a lineup! 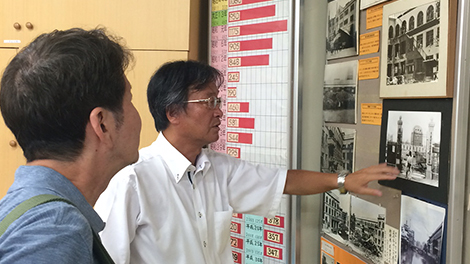 Looking at old photos in the reference room 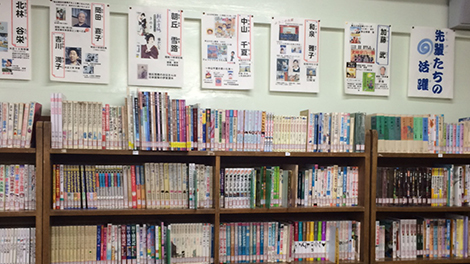 Graduates are introduced in the library.
The hall is located at the end of the second floor under the unique semicircular dome. The school emblem, shaped like a star, shines on in the center of the red stage border. Resembling a Communist symbol, it is the theme of the school song, written twenty years after the emblem was designed and titled “Stars in the Sky” (published in 1909 (Meiji 42). 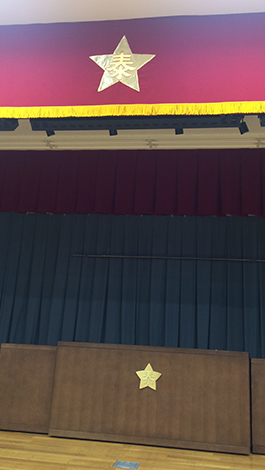 The star-shaped school emblem shines over the hall stage.
Then, Mr. Wada opened the rustic iron door in the left-hand corner of the podium, it made a squeaky sound and surprisingly opened out to a cave-like staircase. Walking down the spiral stairs, we arrived at the side of the gymnasium on the first floor. It simply means that the half cylinder building with the dome has a gymnasium on the first floor and a hall on the second floor, but the thought of a “secret staircase” connecting the two floors is exciting. The design may have come naturally, following the curves of the building, and yet it represents good taste from the early Showa period. 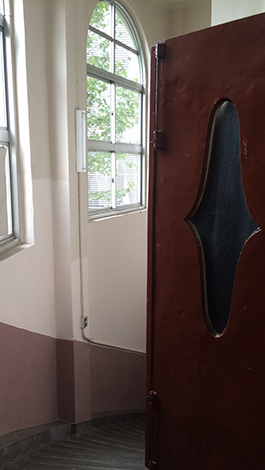 A spiral staircase behind the hall.
Burnt down entirely in the May 1945 air raid, the building was fully restored with attention to the smallest detail (leaving some of the reinforcing bars that were bent in fire); and therefore, the gymnasium had antique wall bars – old, but perhaps not from before the war.
The tour ended outside, in the schoolyard. Looking out to Miyuki Dori through the French gates I could see the café, Aux Bacchanales. Now that I think of it, they may have grown ivy on their building to match the ivy on the walls of Taimei Elementary School.