Ginza is home to several long-established stores that have been in business since the Edo period, but few have continued to run the same business. The long-established Echigoya, located in 2-chome on Ginza-dori, is an example of those rare stores. Miu Miu, Prada’s sister brand, is on the first floor facing the Main Street, but walking through the passage to the Ginza Gas Lamp Street, one can find Echigoya with its old signboard hanging over its entrance. I do not usually wear kimono, so I do not have any personal stories to tell about the store and I do not have enough knowledge about their products to elaborate on them. However, I had been interested in the history of the store for quite some time.
I began by looking up “Echigoya” on the internet and came across information on Mitsui-Echigoya (currently “Mitsukoshi”) and many passages on that stereotype phrase from samurai dramas.
“Echigoya, you are so wicked…”
The phrase is often heard in conversations between villainous merchants and local governors, or so was my impression. However, watching samurai drama closely, I realized that these lines appear do not appear as often as I had imagined and that the name of the store could be “Tajimaya” or “Mikawaya.” Therefore, this phrase, “Echigoya, you are….” came to be widely known as they it was translated into comedy skits and mango.
If the Echigoya that we are so familiar with from samurai drama and comedy is a kimono store from the Edo period, then it must be based on the famous Mitsui-Echigoya or the Echigoya here in Ginza. In “Mito Komon,” Japan’s long-running samurai drama, Mito Komon always identifies himself as a “crêpe merchant from Echigo Province.” Mito Komon, Tokugawa Mitsukuni, the historical model of the character, is said to actually have been very fond of crepe textiles from the Echigo region, and Chosuke Nagai, the founder of Echigoya in Ginza was originally from Takada (currently, Jouetsu City), famous for Echigo crepe. (Takatoshi Mitsui, who established Echigoya in Nihonbashi, was not from Echigo, but from Ise Province.)
While it is not known whether Chosuke Nagai was really the son of a crepe merchant, he opened an indigo dye store called Echigoya in Minami-denma-cho in Kyobashi (currently, Kyobashi 1-chome and 2-chome) when he was around twenty years old, in 1755 (Horeki 5). When he was fifty years old, he called himself Jinemon, which has been inherited generation after generation.
The store opened in Ginza in 1805 (Bunka 2), when the founder passed away and second-generation owner took over the family business. The original store was located on a street corner a few meters closer to Kyobashi, so the store has been in business in Ginza 2-chome for approximately 220 years.
The area was then called Shin-ryogae-cho 2-chome, named after the silver mint (“ginza” is the Japanese word for silver mint) and the money exchange (“ryogae-sho” in Japanese) that was established after the mint. On the other side of the street, in front of Ginza Itoya, there is a small monument that marks the birthplace of Ginza. Therefore, Echigoya developed its business in the area of Ginza close to Kyobashi, which was a busy place from early times.。
The store’s records remain from the Meiji period, when the third-generation owner ran the business. There is a picture of the “dashigeta-zukuri” (protruding beam-style) two-story store which depicts a signboard that says “Gofuku Futomono-rui Echigoya” with the logo adopted by the third-generation owner representing the character “榮,” which means prosperity. The anachronistic word “futomono” was used for cotton kimono as a distinction from silk “gofuku” (kimono). 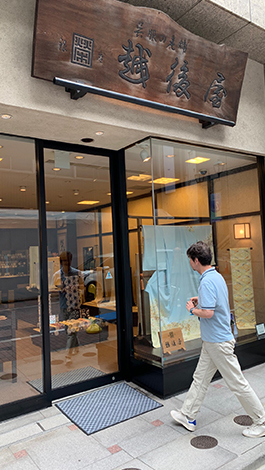 The logo representing the character “榮” can be found on the signboard
The floor plan of the store in 1893-1894 (Meiji 26-27) shows store space facing Ginza-dori, and the names of various items, including “yuzen,” “omeshi” (crepe), and “momen” (cotton), were written out in the area where the dresser might have been. In the back of the long narrow building was the back parlor and kitchen. The warehouse was located facing what is currently known as the Gas Lamp Street. On the second floor, they had a 6-tatami mat room, a 4-tatami mat room and a maids’ room, implying that the employees slept upstairs.
I interviewed Ms. Mami Nagai, the elder sister of the current president of the company, who is the ninth owner counting from the founder. She told me that until the third-generation owner, the owner’s family had also lived under the same roof.
The logo depicting the character “榮” comes from a Chinese proverb that the third-generation owner was introduced to by an old customer. The current president also refers to the proverb in his message posted on their website.
“以力勝者家不久 以徳勝者家久栄”
(The families of those who win by power do not prosper for a long time. The families of those who win by virtue will prosper for generations.)
Inspired by the proverb, which encourages people to prioritize virtue against power, the third owner used the character “栄” in the store logo, which has been redesigned little by little over the times. According to Mami-san, the current sophisticated logo was designed by the seventh-generation owner, who had studied the natural sciences as a student and had a particular interest in design.
The store still preserves the “Echigoya Store Regulations” which had been used from the Taisho period to the early Showa period. I was particularly impressed by a table that described the job rank and salary of employees from their first year of employment.
The table starts with “First year Grade 15 apprentice/no salary.” An employee’s job rank advanced every year, but they would only receive a salary of one yen in their fifth year (Grade 11), after which their salary increased yearly – to one and a half yen, two yen, and the three yen..
The table ends with the 21st year, or Grade 1, so it is likely that employees started as “decchi” (apprentice) and became a full-fledged employee after twenty years of employment. 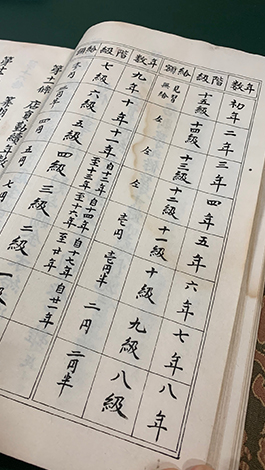 from “Echigoya Store Regulations”
The store changed substantially after being burnt down in the Great Kanto Earthquake in 1917 (Taisho 12). Echigoya ran their business in a shack for a few years until they built a seven-story building in 1931 (Showa 6). Buildings with roofed towers were the trend in the early Showa period, as also seen in the Asakusa (Kaminarimon) subway station building. In a direct mail sent out soon after the store reopened in the new building (February 1932), they advertised, “We have opened a Western clothes department,” perhaps competing against Matsuya, which had opened across the street on Ginza-dori in Ginza 3-chome in 1925. Old maps from then still say “Matsuya Gofuku-ten,” but it was already a department store as we know it, carrying not only kimono but also Western clothing and running a cafeteria. The opening of not only Matsuya but also Matsuzakaya and Mitsukoshi after the earthquake must have been quite a threat to a local kimono store like Echigoya. Although the names of the tenants are not clear, the new building welcomed several restaurants. (A Chinese restaurant called “Chuka Daiichi-ro” was on the basement floor during the years before the building closed.)
“Ginza” by Tenmin Matsuzaki (1927) is a collection of photos of Ginza’s townscape in the early Showa period and describes “Ginbura” trends in Ginza 1-chome and 2-chome in those days.
“The eastern side of 1-chome is busy but 2-chome is more prosperous on the western side, where store windows are worth a look. Passing by Playguide, Echigoya and Meijiya brightened up a boring afternoon. Ginbura strollers without any money in their pockets can go window shopping to feel entertained and catch the spirit of the times.”
This area was popular for window shopping. The Playguide, along with the ticket corner in Kyukyodo, was still Ginza’s ticket booth in the 1970s, when I was a student. I remember coming to search for tickets for concerts by foreign stars (Chicago and other rock bands).
The old ads printed by Echigoya were quite well-worded. For example, a direct mail ad printed in December 1945 (Showa 20), the year WWII ended, starts like this:
“Everything has been burnt down, but our hearts will not burn out. As the phoenix arises out of burning fire with a new life, we shine in the joy of rebirth.
During the period from before the war through the 1940s, after WWII, much of the direct mail advertised local sales events held at public facilities and traditional inns in Yokosuka, Chiba, Toganecho, etc. The copy “rare items and Ginza-style new patterns” implies that Echigoya was an urban kimono brand that everyone dreamt of adding to their wardrobe. 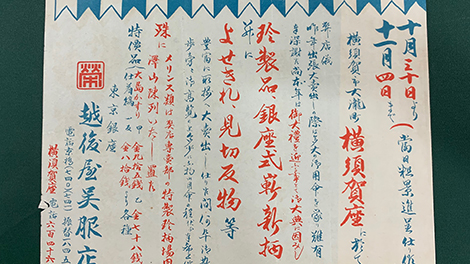 An invitation to an event in Yokosuka
On the day of the interview, I looked into the store windows facing Ginza Lamp street and found summer kimono fabric displayed in the windows. The fabric ranged from traditional Arimatsu shibori from the Nagoya area to very casual patterns depicting cats. These modern patterns were evidence that yukata has become popular among young people. 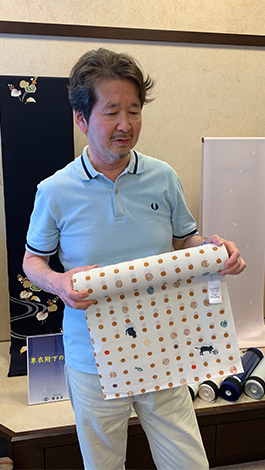 With a roll of cat-patterned fabric in hand, “I prefer dogs.”
The “Yukata de Ginbura” event held in August (this year, on August 3) in Ginza-dori and the school yard of Taeimi Elementary School has become an annual summer festival in Ginza. 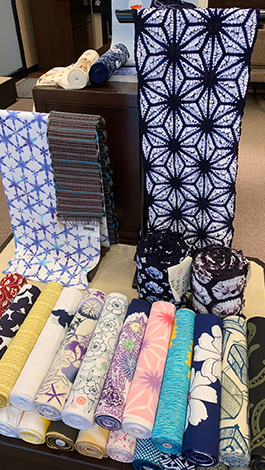 If you order now, you will have a new yukata in time for “Yukata de Ginbura,”