When I walk along Ginza Dori towards Kyobashi, I always feel somewhat relieved at the sight of Sasaki Shoten’s projecting signboard depicting a pipe in Ginza 1-chome. 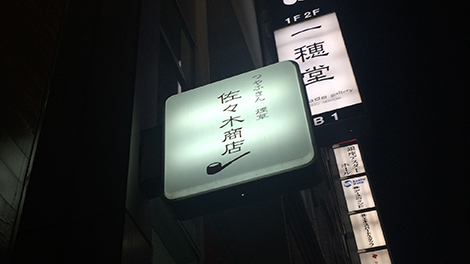 A symbolic sign
Right beyond it (on its northern side) sits KIRARITOGINZA, a commercial establishment that was built a few years ago. The Isei building before it has also been rebuilt, so Sasaki Shoten is the only unchanged store – the short building with a small entrance that it has always been. As the sign implies, it is currently a tobacco shop that mainly sells pipes, but it used to also carry medicine and cosmetics. Sasaki Shoten was established in the first year of the Meiji period, in 1868. Even in Ginza, there are few stores left that have used the same name since its establishment and have not moved from their original location.
Entering the store, one will find on the wall to the right, various types of pipes are exhibited, almost as if they had just come out of a pictorial reference book. Having only smoked a few pipes in my life, all on the occasion of interviews, I have little knowledge of them. However, I do know where they are mostly made, and this is quite a difficult guess. 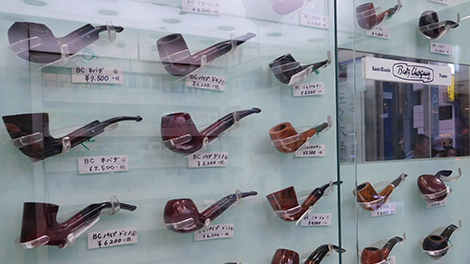 Neatly exhibited pipes
“They are mostly made in Denmark. But the brier wood, which is the root of a bush, is from Corsica in the Mediterranean Sea…”
Even during the short time that I was standing around in the store taking with Ms. Haruyo Sasaki, foreign tourists walked in looking for pipes and foreign tobacco. One customer, and then two…. They now receive quite a number of Chinese customers.
“We used to have an ash tray in the store, but the smoke from our Chinese customers’ cigarettes was too much and we decided to take it away.”
Haruyo-san whispered to me, eyeing the Chinese tourists standing nearby.
The store has always been known for carrying not only smoking supplies but for other unique products, and it often appeared in guidebooks published in the beginning of the Showa period, when “Ginbura” was a popular pastime. For example in Tenmin Matsuzaki’s Ginza (published in 1926 (Showa 2)), the store appeared in the section introducing prestigious stores on Ginza-dori at the end of the book.
“Nowadays, Sasaki is better known by the name Pompeian. Pompeian Company’s perfumes and cosmetics have been flowing into Ginza and welcomed with open arms by the young and beautiful people who shop in Ginza. Yet, “Naredo tsuya-fukin” also still sells very well.”
To explain the details of this entry one at a time, Pompeian Company, is the predecessor of today’s P&G (Proctor & Gamble), and its massage cream and perfumes were some of the major merchandises that the store carried from the Taisho period until World War II. 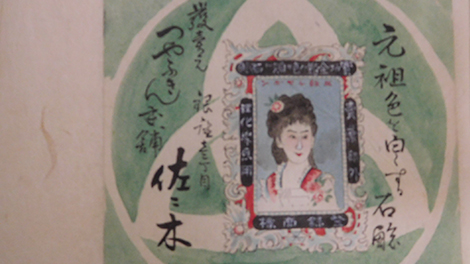 Now and then, whitening is an eternal theme
“I have been told that when the store was burnt down in the Great Kanto Earthquake,” Pompeian Company donated about 50,000 yen, which was used to rebuild the three-story building.”
That would imply that the store was a favorite among the “MOGA,” or “modern girls” (a popular phrase in the 1920s describing chic girls) strolling in Ginza.
By the way, Haruyo-san, whom I interviewed, is the wife of Yasuyuki, the sixth-generation owner of the store. She was married in 1968 (Showa 43), so it must have been right after the Toden city tram was abolished. Pompeian products were no longer sold in the store, and since Hollywood Cosmetics had served as agent for a while after the war, a beauty salon run by Hollywood Cosmetics was located the second floor.
Speaking of the second floor, in the early Showa period, when Tenmin Matsuzaki held the interview for Ginza, there was a popular billiard room.
“Entertaining all year round!
And where is that?
The billiard room at Pompeian’s Sasaki Shoten”
A light and fancy ad of the room can be found in Ginza.
“I recall my father-in-law having a passion for billiard. If there was a billiard table in the hotel he was staying at, that is where you would find him.”
“Haruyo-san said. Perhaps the billiard room in the store did have some influence on him.
Back then, the building had a coffee shop on the basement floor that was popular for soda and ice cream.
The founder of Sasaki Shoten, which was established in 1868 (Meiji 1), is Genbei Sasaki, who made his living as a druggist. After him, some unique people are known to have run the store.
“The second owner became engaged in trade and even travelled to the US, but he passed away young. Then, the store was taken over by Otani Tomoemon, who had grown tired of acting and had served as clerk. While continuing the trade business, he opened a coffee shop, competing against Shinseido with a new American style.” (Keiji Isurugi. Tokyo fubutsu meibutsu-shi (Scenes and specialties of Tokyo)
Otani Tomoemon’s name appears in Matsuzaki’s Ginza as well. It goes without saying that Otani Tomoemon is a famous professional Kabuki actor name that has been passed down from the mid-Edo period. Matsuzaki’s book also mentioned his given name, Kametaro, so I looked him up. My guess is that he was a pupil but was not actually successor to his master’s name. It seems this man from the Kabuki theater started a coffee shop and billiard room to boost the store.
Unfortunately, nothing is left to tell us any more about Otani or the billiard room. However, the store has preserved a valuable piece from the Meiji period called “Hikimaku zuan mihon-cho.” It is a booklet of designs of the ads to be put in the kabuki curtains as gifts for the kabuki performers. Sasaki Shoten had controlled all the pharmaceuticals in central Tokyo. The booklet contains very rough sketches of each ad, but from the design, slogan and colors, one can feel the atmosphere of the times. 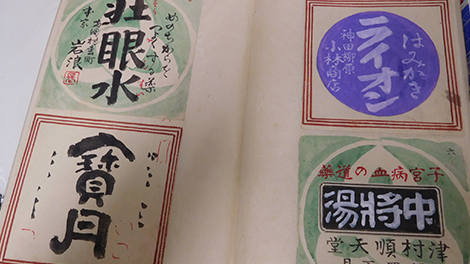 Various ads drawn in the “Hikimaku zuan mihon-cho”告
Some famous ads include one for Tsumura Juntendo’s “Chujoto” and another for Kobayashi Shoten’s “Lion” toothpaste. Then there is a slip of paper that says, “Curtain ad for Ichikawa Enzo.” Then it came to me that perhaps it was because they had connections with the Kabuki world that someone like Otani would join the company. The booklet of ads contained many designs for Sasaki Shoten, most of which advertised “Tsuyafukin” or said “Tsuya-fukin Honpo” (=Tsuyafukin store).
“Tsuya-fukin,” which I should have explained earlier, is a traditional product of Sasaki Shoten, sold from the Meiji period. It can be found sitting modestly on the shelf beyond the pipes and tobaccos. It looks like a yellow Duskin dishcloth, but it is wrapped in an anachronistic paper package with a description of the product in old writing.
“‘Sasaki’s Tsuya-fukin’ from Ginza 1-chome is a polishing cloth that everyone knows from long ago…” It goes on to explain which furniture pieces it is most effective on.
“Bureaus, tea chests, the tokonoma (an alcove in a traditional Japanese room with wooden floors), staggered wall shelves, the koto, the shamisen, musical instruments, as well as ebony, rosewood, mosaic woodwork and other crafts using exotic wood- the Tsuya-fukin will give everything a shiny polish. Brass, copper and steel kitchenware will not become rusty if they are polished with the Tsuyafukin, so it is a very convenient product.”
Reading the description, one is reminded what a traditional Japanese house looked like. To put it simply, the cloth is good for polishing wooden products.
Also printed on the package is the name “Ikenohata Houtan,” a pharmacy (Morita Houtan) established in 1680 that is still in business near Shinobazu-no-ike (Shinobazu Pond) in Ueno. The cloth, jointly developed with this pharmacy contains a special wax. This wax is not a chemical product, but is taken from an insect.
Have you ever heard of scale insects (Coccoidea) – those tiny pearly insects that are found on tree branches? The wax that is secreted by white wax scales (Ericerus pela) on border privet (Ligustrum obtusifolium) branches are soaked into cotton cloth. If you are not fond of insects, the thought of it may be repulsive, but the wax released on border privets is also the main ingredient of those quaint Japanese candles.
I have heard that honey is produced on the rooftops of buildings in Ginza nowadays. The Tsuya-fukin is another ecological product made in Ginza.
So, I guess connoisseurs polish their pipes, bought here, with the Tsuya-fukin…