Typographer in Kobikicho
Walking down the street on the side of the Kabukiza Theater toward Kyobashi, just after passing by Magazine House, you can find old buildings here and there. Among the Italian and French restaurants that have increased in this neighborhood is a small printing shop with a signboard that reads “Nakamura Katsuji.”
Through the window on the second floor you can see the storeowner and shelves of type cases. I had always wished for an opportunity to talk with the owner. 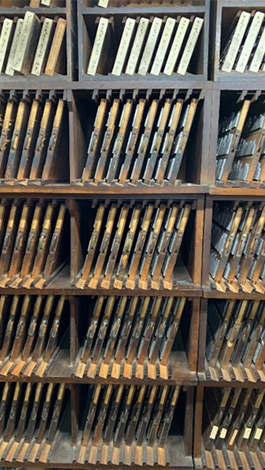 Shelf of neatly lined type case.
They survived the Great East Japan Earthquake.
The business card that I received when I first stopped by to request an interview said “SINCE 1910.” The printing shop was founded in 1910, or Meiji 43, in the same location as where it stands now in Ginza 2-chome, which was then Kobikicho 1-chome. The letter “T” printed on the business card and on the backside of the “banten” robe for festivals hanging on the wall in the entrance takes the first letter of “typography” and the founder’s name, Teijiro Nakamura. The current building was rebuilt in the early Showa period after it was burnt down in the Great Kanto Earthquake. The façade has been more or less repaired, but maintains the features of a billboard building, which was the trend then. The printing shop is currently run by Akihisa-san, the fifth storeowner who is a baby-boomer aged 71 years old. 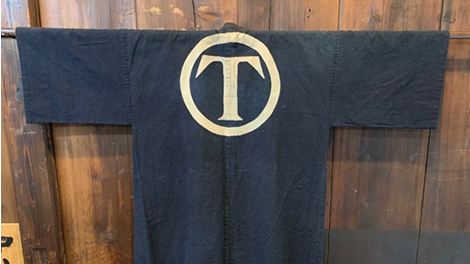 ”Banten” robe with a T resist-dyed on the back.
The year 1910 was the year when the railway was extended northward from Shimbashi, the original starting point of the railway, and a station was built in Yurakucho. (Tokyo Station was opened in 1915 (Taisho 3)). Well, this information may have little to do with a printing shop. Ginza in those days was home to many newspapers, with Chuo Shimbun and Mainichi Shimbun on the corner of Owaricho (today’s Ginza 4-chome intersection) and Yomiuri, Asahi, Tokyo Nichi-nichi, and Manchoho also located nearby. I had supposed that was the reason the shop had started its business in Kobikicho.
“Well, this area was full of typographers and printing shops, but newspaper printing, which was called “peji-mono,” was dominated by the larger companies, like Shueisha and Tsukiji Kappansho.”
Shueisha, the precedent of DNP, was located near Sukiyabashi; and Tsukiji Kappansho was the first printing house in Japan, standing where the monument of the “origin of typography” stands today next to the old Dentsu Building (Tsukiji Dentsu) near Iwaibashi.
“The small printing shops around here printed what was called “hashi-mono,” referring to shop flyers, seasonal greeting cards, business cards, and documents issued by government offices in Marunouchi and Kasumigaseki. Actually we didn’t do the printing. We were a type foundry. When I was a child, young men from nearby printing shops would come to purchase letters that they had run out of.
When you enter the shop, you will find in front of you a small counter where you can discuss your order. Their main product currently seems to be business cards, which customers came to place orders for before and after the interview.
Pushing a part of the counter upwards, you can enter the workspace with shelves of typefaces. Led by Akihisa-san, I was granted the opportunity to see the shelves and the foundry in the back. 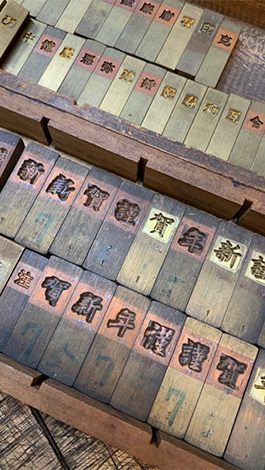 Concave molds for New Year’s greeting cards
The typefaces are stored in the order of radical index, as in the Kanji dictionary. If you are not very familiar with the Kanji dictionary there can be many surprises. “Do you know which kanji radical the character “kin欽” in Hagimoto Kinichi-san’s name belongs to?”
My answer was “kane-hen”(金, gold/metal radical), but this character was classified by the radical “欠” on the right-hand side “It is called “akubi” (欠, yawning radical)”
When I checked my dictionary at home I found it in the欠 yawning radical section along with the characters欲 (greed) and歌 (song).
Since it is important to quickly find the right type, one must remember exactly where each type is stored . There are different fonts and sizes in a typeface. Ginza Hyakuten is currently basically printed in 13 pt, but when it was founded in 1955 (Showa 30), it was printed in a smaller font like other magazines and newspapers.。
Walking down the corridor lined with shelves of type, I recalled that when I was in my 20s, when many magazines still used hand-set letterpress printing. In the early 1980s, when I was working in the editing section of the Weekly TV Guide magazine, I was sent to the page editing section. My main task was deciding on the layout of the articles and proofreading, and I would always shut myself away in our satellite office at DNP to finish proofreading. Although not as frequently as magazines covering current affairs and incidents, the contents of a TV program would be changed just before finishing. Being the youngest of the team, I would then have to go to the printing house near DNP, where I would ask the elderly typesetter picking up letters in the old printing house with an oily wooden floor, “Excuse me. I have an urgent request. Could you please assemble a form for this?” The old man would typeset the new program title and cast members.
The elderly typesetter that I would often approach always looked worn out, searching for letters with a triangular packet of coffee in his hand.
In the back of the typeface shelves, there is a foundry with a printing machines and casting machines. Akihisa-san spoke a lot of jargon, including “page-mono,” “hashi-mono” and “uma,” which stands for the shelves storing the typefaces. He showed me the printing equipment used to create the printer’s proof, which we refer to as “gera,” coming from the word “galley” proofs, so named from the square trays into which type was laid and tightened into.
In the corner of the ceiling, I found a peculiar device that resembled an old radio that had been installed during the summer before the Tokyo Olympic Games, when there was a water shortage, in order to supply the casting machines with water. I failed to understand the structure of the device but guessed that the casting machines had been in full operation then. I was told that they had employed more than ten workers. 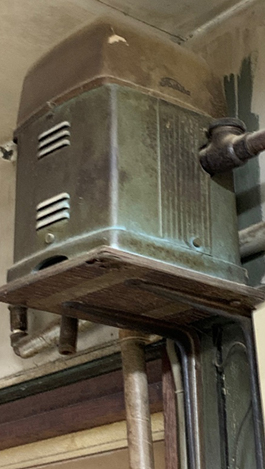 A queer device manufactured during the high-growth period 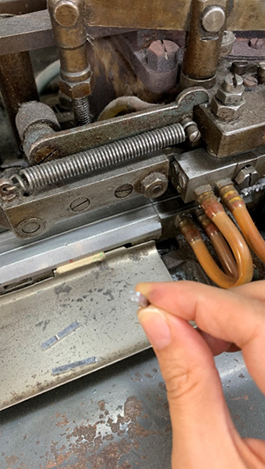 A newly casted type
The movie Aki Tachinu (The Approach of Autumn) directed by Naruse Mikio in 1960 (Showa 35,) four years before the Olympic Games, was staged in this area of eastern Ginza. A viewer will recognize the local scenery, including the Japanese restaurant Manyasuro and willow trees along the bank of Tsukijigawa River. Nakamura Katsuji also appears for a moment. When I initially met Akihisa-san, his first comments were about this movie.
To offer a brief summary of the story, it portrays a boy who comes out to Tokyo from Shinshu Ueda with his mother (Otowa Nobuko) for certain reasons and rents for one summer a room on the second floor of a greengrocer’s store located in the outskirts of Ginza. In the opening scene, where he comes out of the subway station in the Ginza 4-chome intersection, crosses the wide Showa-dori toward Kyobashi Elementary School, and finally arrives at the greengrocer, a store with the signboard “Nakamura Katsuji” can be seen in the background, on the other side of the street.
The scenery that the boy walks through before arriving at the greengrocer’s is indeed real, but the Nakamura Katsuji shop in the background is a well-made film set. This is described in the magazine Tokyojin (November 2009, “Tokyo in Film”) by Japanese movie fan Eiichi Otaki, who articulates in conversation with Saburo Kawamoto on his detective-like probe conducted in the neighborhood. Akimoto-san only learned that his home had appeared in a Naruse movie only after being informed of the article from another person./
“The film set is well made. It looks just like what our shop looked like in the old days and shows in detail a worker picking up type.”
Checking the DVD in my possession, I confirmed that a typesetter could be seen working in the back through the doorway of a shop resembling Nakamura Katsuji. Akihiasa-san, who is now 71 years old, was the same age as the boy portrayed in the movie as a sixth grader. The local boys in Ginza bully the new boy taunting “country boy” at him, but the same time seem to have a sense of intimacy. The store in the movie has a staircase on the other side by the typeface shelves leading to the second floor. Akihisa-san used to live on the second floor back then.
I decided to make a box of business cards at the store. From the booklet of paper samples, I selected “snow white” Vannubo paper. The letters would be printed in black and “Izumi Asato” would be printed in 16pt. 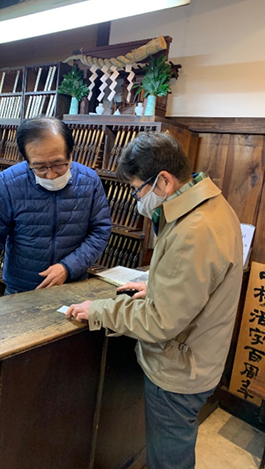 Consulting about the design of the new business cards.
Proofing the design and letters was done virtually (using my iPad) and in four or five days I received a call that the cards were done. I passed by the Kabukiza Theater to visit Nakamura Katsuji again and received 100 business cards at the counter (¥9,000 including tax).
Sitting in a café, I snuck my cards out and let my fingers slide over my name. The dented texture unique to letterpress printing excited me. I could imagine Akihisa-san picking up type in his workspace. 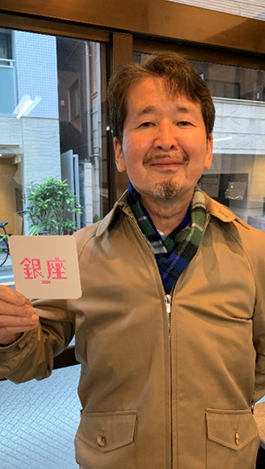 Experiencing hand-set letterpress printing on a coaster at the shop