The King of Mingei on Nishiginza-dori

Walking towards Shinbashi along Nishiginza (Sotobori)-dori, you can find an old Mingei store with a sign that says “TAKUMI” as you enter the 8-chome block. I had always vaguely imagined that it had originally opened for foreign tourists around the Tokyo Olympics, just like the International Arcade that stretched under the elevated railway tracks behind Corridor Street until just recently. However, I was told that the TAKUMI was established in 1933 (Showa 8), even before World War II. The store was first opened in a two-story building located closer to Shinbashi, two or three buildings away from the corner near Dobashi Bridge, a bridge that is no longer there. 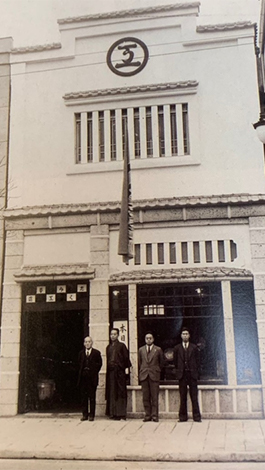 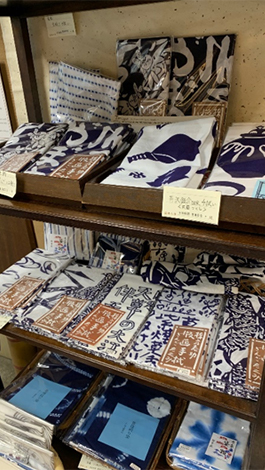 A tenugui towel based on a design drawn by Shiko Munakata. 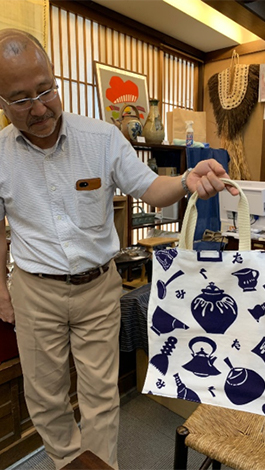 Developing a tenugui eco-bag!
I would say that TAKUMI’s strength is in local pottery from all over Japan. I had just broken my beer mug the day before the interview and. I had planned to purchase a new one at the store.
After hovering between two or three different cups, I finally decided on a Yomitanson pottery tumbler from Okinawa. I liked the blurry blue round spots on a light yellow ochre background. I visited Yomitanson Village around 15 years ago to interview the Yamuchin no Sato kiln, so I felt a certain closeness to the land. 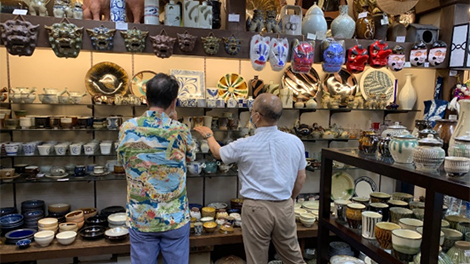 Looking for a buddy for my beer.
The other tumbler that I found difficult to choose between was from the “Hita Sarayama Onta” kiln. I liked the sound of “Onta” which soundes like a rural dialect; and the kiln had a long-established relationship with TAKUMI, where Soetsu and his Mingei movement group had often stopped by. Mr. Nozaki showed me a movie of the mountain village with beautiful terraced rice paddies. The traditional tools, including the Karausu (Chinese mortar), that use the water power from the stream in Maru-Ishigaki were also inspiring. Moreover, young craftsmen are making great efforts in these areas.
Locating the village on a map, I found it on the northern edge of Hita City in Oita Prefecture. On the other side of the mountain to the west is a small train station called Chikuzen Iwaya, but the Hita Hikosan Railway is currently out of operation due to damages caused by the heavy rain (and will be replaced by a modern bus system). I learned from a local bus app that there is a rare bus route from Hita Station to Sarayama, the entrance to Onta Kiln. This place is on my wish list of places to visit once the COVID-19 chaos is resolved. 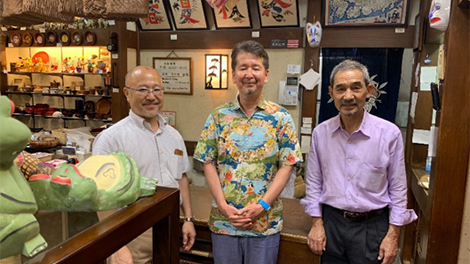