I am sure few people today say “I’m going to go ‘Ginbura (strolling in Ginza),’” when they go shopping or for a stroll in Ginza, but people are still familiar with the word “Ginbura” itself. This is the first of a series of essays that I have been granted the opportunity to write for this column titled “Ginbura Hyakunen” (the centennial history of Ginbura). Why the centennial history? In Ginza Saiken, a classic guide to Ginza that was published early in the Showa period, Kosei Ando, the author, explains:

“It was around the fourth or fifth year of the Taisho period that people started to refer to strolling in Ginza with no particular purpose, just to indulge in the high-end feel of the town as “Ginbura.” Like “Tora-gari,” (literally, “tiger hunting”) the word used for strolling in Toranomon, it was coined by students from Keio who had a special talent for enjoying urban life.”

There many different stories concerning the origin of “Ginbura,” so I will leave that for later discussion. Assuming that Ando’s explanation is true, Taisho 4 or 5 is 1915 or 1916 on the Western calendar, which is just a century ago. Being a Keio alumnus, I was inspired to write some essays that would take me back one hundred years and allow me to revisit the fascinating history of “Ginbura.”
Wondering where I should start, the first place that came to my mind was the stationery store, Ginza Itoya, in Ginza 2-chome. I am writing this essay at the time of year (November 2015) for my annual stroll in Ginza – when I go to Itoya to purchase a new monthly planner. Every year I purchase an “AT·A·GLANCE” planner, made in the U.S.. It is the type of planner in which you write your schedule in daily blocks on a monthly calendar. The oldest planner kept in my closet is from 1986, which means that assuming that this was my first purchase, my year’s end visit to Itoya as continued for thirty years now.

I was also curious to explore their recently renewed building.

I got off the subway and walked down Ginza Dori from the Ginza 4-chome intersection toward Kyobashi. Ginza has entered a reconstruction boom and since the Mikimoto building is currently under construction, I missed the famous Christmas tree this year. However, the Japanese yew trees lining the sidewalks should soon be illuminated. On the east side of Ginza 3-chome stands Matsuya Ginza, with Louis Vuitton on the first floor. Then, crossing Marronnier Dori and passing by Bulgari in Ginza 2-chome, I arrived at Itoya, a long and narrow building with a glass facade. With Tiffany standing next to Itoya, this part of Ginza has become truly high-end.

The red paper clip symbolizes Itoya. On the glass window facing the street, a round emblem depicting a fountain pen and ink says “1904-2015,” with 2015 representing the year when the new building was built, and 1904, the year of the store’s establishment.

The year 1904 is ten years before the word “Ginbura” was coined and the 37th year of the Meiji period. Historically, it is a time when the Russo-Japanese War had broken out and postcards were printed one after another to convey the succession of victories.
“A long queue would form in front of Itoya before it opened because people wanted to purchase the latest postcard. People said that Itoya expanded its business through postcard sales.”

To go back in Itoya’s corporate history, the founder, Shotaro Ito was born into a family running an import merchandiser business in Ginza 7-chome (former Takekawacho). Shotaro had a store in Hakuhinkan, in its Teikoku Hakuhinkan Kankoba days, but when the stationery store next door proposed to sell their business to him, he decided to change his trade. He soon opened Itoya in Ginza 3-chome, in a corner of the area where Matsuya Ginza stands today. It was a brick building with a narrow storefront of around 5.4 meters and a signboard that said “和漢洋文房具 GENERAL JOB PRINTERS BOOKBINDERS STATIONERY” in gold letters on a white board that gave it a sophisticated look.

Itoya’s hit product of its early years were postcards associated with the Russo-Japanese war, and today, and it still sells postcards on the first floor. Since it was the holiday season, a variety of Christmas postcards and letter writing sets were on display. I would say the atmosphere of the ground floor is unchanged from before the store’s renewal. Somewhat restlessly, I chose a few Christmas cards and New Year’s cards and headed for the fourth floor, where the planners would be. The new building basically has an escalator on the left side and the cashier to the right or in the back.

On the first to fourth floor, they sell mainly conventional stationery, including cards, writing instruments, notebooks and planners. Their world opens up on te fifth floor and above, where they carry a wide range of products, from travel goods to interior items, such as cups and cushions, and also an area specializing in paper. The eleventh floor holds surprises. Getting off the elevator, I was welcomed by lettuce lit up in the window. Frilled lettuce was being grown at the indoor farm on the other side of the glass. 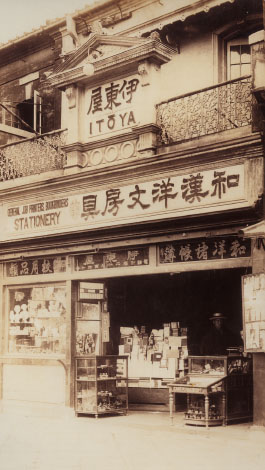 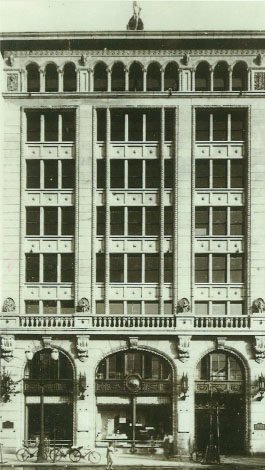 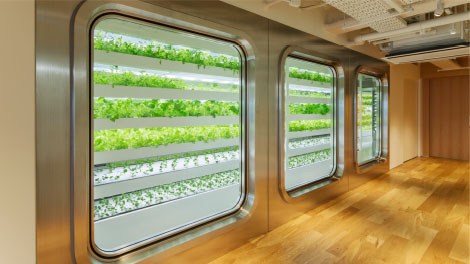 Vegetable factory
Data on the lettuce are displayed just like the newest factories. This lettuce I, of course, not being grown just for enjoyment but to serve as salads served at the café on the top floor, the twelfth floor.

I have seen skeptical comments on the Internet about Itoya’s new endeavors that say, for example, “I would ave liked Itoya to specialize in stationery. They don’t need a café.” However, there have been times in Itoya’ history when it was indeed like a department store. The building constructed in 1930 (Showa 5) after recovering from the Great Kanto Earthquake, in particular, was an 8-story Renaissance revival-style reinforced concrete building (with two basement floors). It was a high-rise building comparable with the three major department stores (Matsuya, Mitsukoshi, Matsuzakaya) that also stood on Ginza Dori. Photos reveal that Itoya and Matsuya were almost the same height, standing side by side.

The floor plan was as follows:

It was no different from a department store. By the way, Aguri Yoshiyuki is the mother of Junnosuke and Kazuko Yoshiyuki. She was a celebrity of Ginza then, which implies that the Itoya building was a trend spot. 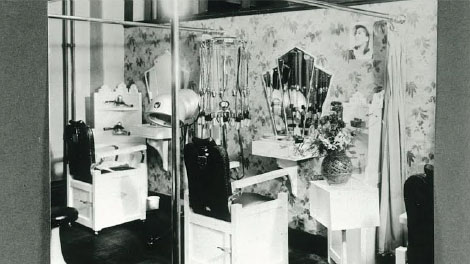 Aguri Beauty Parlor
I ordered a Eggs Benedict, which was featured on the lunch menu at the café on the twelfth floor, imagining Itoya in the early Showa period, when “Mobo/Moga” (“modern boys” and “modern girls” who followed Westernized fashions and lifestyles in the 1930s) would have gathered. 2000 yen is quite expensive for a lunch, but the rich creamy egg yolk and “locally” grown salad were quite savory.

Since the “AT·A·GLANCE” planner is made in the U.S., it comes with small stickers for Japanese national holidays. New Year’s Day, Coming-of-Age Day, National Foundation Day…. I started my annual task of placing small round stickers on the corresponding slots as I enjoyed my Eggs Benedict.
Ginza Hyakuten runs a mini column on items bought or found by Mr. Izumi during his interviews for his monthly column “Ginbura Hyakunen.”
Ginza Hyakuten is available at member stores.
Or, have your personal copy delivered every month by subscription.
Please refer to our website for details: http://www.hyakuten.or.jp/