The Ginza Apartments in Ginza 1-chome

The last two volumes covered the northern side of Ginza – ITOYA and Olympic, a restaurant serving Western cuisine that used to stand next to ITOYA. When I was interviewing people in the area, I was impressed by the fact that quite a number of old buildings remained in the backstreets of Ginza 1-chome and 2-chome. The Yonei Building, housing Ginza Maison Henri Charpentier at the end of Ginza Yanagi-dori, and the Takeda Building along Showa-dori were built in the early Showa period. Coming out to Showa-dori from one of the alleys, you can also find the picturesque wooden building of a sword shop. You will also find classical buildings still standing when you walk towards Shintomicho. The building that I always find myself lured into during my strolls on Mihara-dori in Ginza 1-chome is the Okuno Building. The green plants sitting in the balconies of each apartment against the yellow ochre walls create a balanced array of colors. Today, it is home to many antique shops and art galleries, but it used to be an apartment building called the Ginza Apartments. 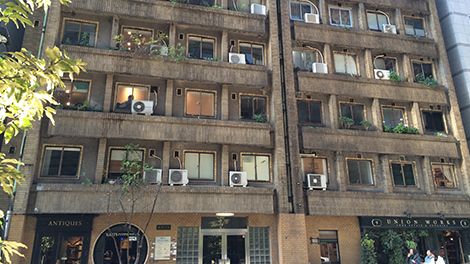 Okuno Buillding
I first visited this building around twenty years ago to drop by a personal art exhibition of works by an illustrator of my acquaintance. Back then, there were few art galleries in the building, whereas now, you feel as if you are at the school festival of an art institute, with small rooms exhibiting paintings and objects facing the small corridors on each floor. Another feature of this building is its antique elevator, with a semi-circular clock-like indicator (floor indicator) over the doors. The elevator has two doors that have to be opened by hand. The Nihombashi Takashimaya and Mitsukoshi both have classical elevators, but ones with manual doors have become quite rare.。 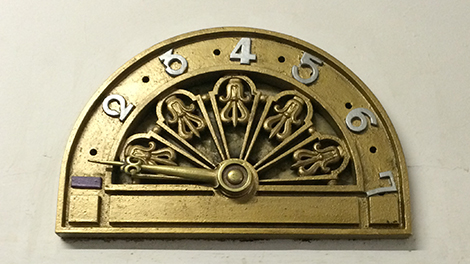 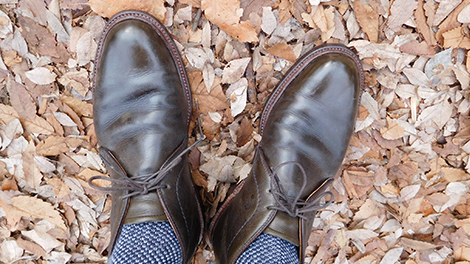 My shoes, resoled at UNION WORKS
Ginza Hyakuten runs a mini column on items bought or found by Mr. Izumi during his interviews for his monthly column “Ginbura Hyakunen.”
Ginza Hyakuten is available at member stores.
Or, have your personal copy delivered every month by subscription.
Please refer to our website for details: http://www.hyakuten.or.jp/