A Senbei Store in Ginza

Namiki-dori is one of my favorite strolling streets. In the volume about Mikasa Kaikan, I illustrated the townscape on the southern side of Harumi-dori, but the northern side is just as nice. First, as we enter the street, there is the Teijin Men’s Shop, which used to be the center of the then popular “Ivy League look.” I have been told that the current building was built in the year of the Tokyo Olympics, in 1964. (The store was established in 1960.) The building looks unchanged from how I recall seeing it as a junior high school student, back when I started to come to Ginza on my way home from school. Then, next to Teijin, stands the Matsuzaki Senbei store.
I believe I first learned about this senbei store when I was in junior high school and I had just become interested in the VAN shirts sold at “Tei-Men’s.” I rarely turned the corner into Miyuki-dori, but since Hatoya Paper Store diagonally across the street from Matsuzaki Senbei was run by the family of Mizuno-kun, my classmate at Keio Chutobu Junior High School, I would sometimes stop by their store when I was in Ginza. I vaguely recall seeing Matsuzaki Senbei on one of such occasions and being surprised that Ginza had a senbei store.
The store was not one of my frequent destinations as a student and it was a while later that I went to the store as a customer. In the mid-80s, when I was writing an essay on snacks for OLIVE, a fashion magazine for young girls, I visited the store for an interview and enjoyed some matcha tea and senbei in their tearoom.
I had the opportunity of learning about the history of the store from the Vice President of the company, Mr. Sohei Matsuzaki, whom I had met before at a gathering in Ginza. The store has a magenta-colored signboard with its pine (matsu) logo. The building today is a seven-story building with a sword store and dentist, but the store was originally opened in almost the same spot on Miyuki-dori in the 1865 (Keio 1), toward the end of the Edo period. Before Ginza, they were located in Gyoran-zaka in Takanawa (established in 1804), so their initial customers must have been people visiting Sengaku-ji Temple.
“The trade name of the store in Gyoranzaka was called Mikawaya. I have been told that the founder of the senbei store was from Aichi and had trained in the Kansai area”
Despite its long history, there are no records from the Edo and Meiji periods because all materials have been lost in frequent fires. The store was completely burnt down three times: in the Great Fire of Meiji 5 (1872), which consequently led to Ginza’s modern development, in the Great Kanto Earthquake in 1937 (Taisho 12), and in the air bombs of 1945 (Showa 20). Every time, they had to rebuild from barracks.
“You see, we burn very well. After all, we are a senbei store…”
Sohei-san joked about it, but I could also sense the confidence of generations of storeowners whose business had survived rough times.
“This is not very old.” He said, handing me a thick heavy album, which is called “The Recipe Book” among the employees. It was a scrap book with pictures of senbei molds and old ads. Judging from the fact that the address on one of the flyers was “Ginza-nishi” and the area code of the phone number was two digits, my guess is that they must have been printed not long after the war, from the late 1940s to 50s. 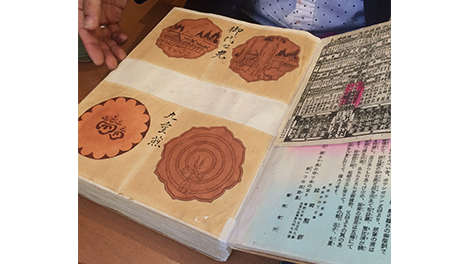 ”The Recipe Book” full of history
For example, this probably comes from one of those leaflets found in a can of senbei introducing the product, but it is quite poetic.

It was dusk when I gazed at Sumidagawa River, which one can never see enough of, Matsuchiyama is beautiful against the moon, and I could see a boat with a sail, when I heard, “The baby cries. The senbei is in the cupboard,” and so they started to sell a senbei named after the moon and snow, and “penpei” shaped like a plectrum, which were skillfully made fortune cookies with fortunes that everyone enjoyed, and in Mimeguri, known for good taste and gracefulness, with our daily mouths and tongue in Shirahige, and our heart, in Sekiya patiently, and our bodies with Chomei-ji Temple’s long life, floating down the river in a houseboat, looking through the reed screen from which, beyond the bank, we can see the Hyakugan show….

I unconsciously started to copy the text and realized half way through that there was no end to the sentence. The entire text was just about double the length, and with the name of tourist spots here and there, it was written in the style of a tourist guide to Sumidagawa River. “’Penpei’ shaped like a plectrum” must have accompanied their most popular “Shamido” (sembei shaped like the body of a shamisen). I was able to find something close to that image among the senbei molds archived in the album. Then, “penpei” must be a play on words, linking “senbei” with the “pen-pen” sound of the shamisen.
As I mentioned earlier that the text sounded like an introduction to the banks of Sumidagawa River, the album contained various elaborately designed molds depicting Edo and the landscape of Tokyo. There were also “hagoita” racket-shaped molds with the name of a Kabuki actor and a ukiyo-e. It is not known whether these were sold at performances at the Kabukiza Theater or at the Shimbashi Enbuji Theater or if orders were placed by the actors as gifts for fans. 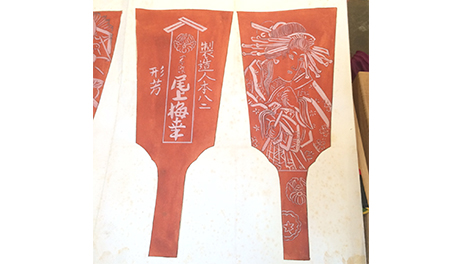 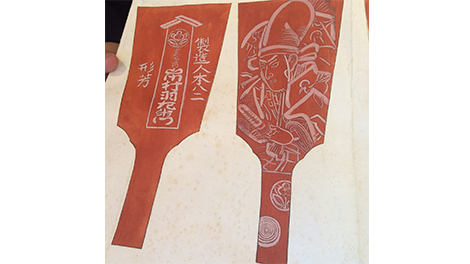 Picture of senbei shaped like hagoita rackets bearing the names of Onoe Kobai and Ichimura Uzaemon
They seem to be precise sketches of senbei molds, colored afterwards. Going through them I wished that there was a catalogue of molds. The sophisticated text and the sketches of molds makes one wonder if the store had very talented employees well-versed in literature and the arts.
“I would imagine they used professional designers and copy writers, of course, but my father was an ingenius paper-cutter and would cut out major Tokyo scenes. He might have drawn some of those sketchers himself.
Tokyo fubutsu meibutsu-shi (Scenes and specialties of Tokyo) (Keiji Isurugi), a guide to Tokyo which was published around the same time as the ads and molds archived in this album describes the store as follows:
“Famous for ‘omocha (toy)-senbei’ and ‘castella-senbei,’ the store has changed the conventional shape, design, branding and ingredients of the average senbei, introducing products of higher quality. It has received awards at the 1907 (Meiji 40) Tokyo Industrial Expo and the 1920 (Taisho 12) Peace Commemorative Exposition. Their senbei feature the uniqueness of ever-changing taste and design, and are enjoyed as Matsuzaki Senbei by people of all classes, beginning with the noble.”
“Beginning with the noble…” as in other excerpts from Isurugi’s book that I have introduced in earlier volumes, his comments are unique. I was especially curious to know what an “omocha-senbei” was. I had thought for a moment that it might be “omochi ya senbei (rice cakes and senbei)” but “omocha” was indeed the right way to read it. It was the name of a senbei that is not manufactured any more, made by enclosing fortunes and toys in the senbei. This description offers the reader an idea that different molds were used to create new products, one after the other. Just as they used to sell “shamido” with the names of Kabuki actors, they have a series of popular characters, such as Hello Kitty and Chibi Mariko-chan.

Hot irons displayed in the Ginza Main Store
They not only develop new products, but they also have a new store outside Ginza. The location is Shoinjinja-mae in Setagaya. Their website offers an image of the store, but I visited it on a later date when I went by it in my car. The approach to Shoinjinja Shrine, running from Setagaya-dori, past the Setagaya Line station to the shrine, is about one kilometer long. It is the perfect walk and in that warm atmosphere of the Setagaya Line, an increasing number of cafes and fancy goods stores like those found in Shimotakaido and Nishogikubo have opened on the shopping street.
The Matsuzaki Senbei store is a café using their old logo depicting a wreath of pine leaves. Its next-door neighbor is a laundry store and the café across the street can be seen from the large window. I sat in the café enjoying my “anmitsu (a Japanese wagashi dessert with agar jelly, fruits, mochi, red bean paste, green tea ice cream, and drizzled with syrup)” and observing other customers. There was a group of four young moms, a passive boy and his girlfriend, dressed in the latest fashion, high school students on their way home from school… Their customers seemed to be quite different from the Ginza store. And I noticed that most of the young people walking on the street outside the window wore hats. People wearing Panama hats walking in the townscape of low two-story buildings may actually be close to what “gin-bura” looked like in the early Showa period, although of course, the café has very different look.